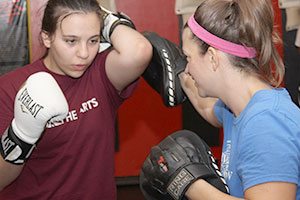 Our Kickboxing classes Lakeland Fl will literally kick butt, burn calories and bring you goals you didn’t know you had.  Each class is different, and engaging.  Teaching you great techniques and combinations.  Building your body through group fitness and fun kickboxing classes Lakeland FL.  You will see improvements in your first few classes.  Though the real goals start to hit you as each month passes by.  You’ll get stronger and most of all you we love the way you start to feel the more you come! 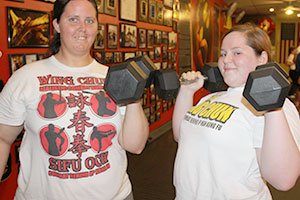 We believe that our Kickboxing classes Lakeland Fl are the Most Fun, Effective workout you’ll experience.  It’s time you reached your fitness goals.  We make fitness fun.  It’s time you burn those calories and get in shape in Fun classes will have you coming back for more Not one of our classes is the same.

With great music and challenging Kickboxing combinations and exercises. Warming up and working out your core to your cardio is good for the heart, mind and body.

GET IN THE BEST SHAPE OF YOUR LIFE! 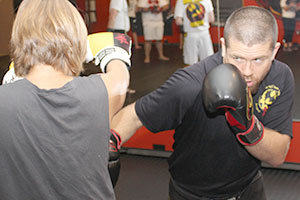 Yes, fitness can be Fun!  We aim to make every class exciting and make you sore.  Our classes are all about great techniques and making new friends.

We are here to get Lakeland in shape!  Our Studio is lean, clean, and ready to make you into a fighting calorie burning machine.  It doesn’t hurt that we have amazing instructors and all the equipment you will need to make each class exciting. 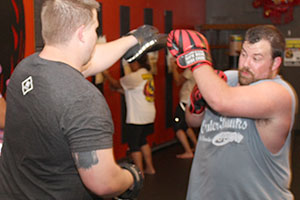 We honestly feel you won’t find a better Kickboxing class in all of Lakeland. To prove it we provide you a 5 class for $25 Trial. So you can feel great, burn fat, all while getting a full body workout.

Each of our instructors are fully trained and bring a different aspect to each of their classes.  These instructor lead courses include exercises and combinations that will keep you moving and learning. Your Fitness goals don’t have to be torture. They can be fun and entertaining. All while keeping you on your toes and laughing with new friends.

Get all of your fitness goals met in a fun and great training environment. Put our 11 years of Experience training Lakelander’s to your advantage.

Visit our Kickboxing in Lakeland FL page for more details and a video!

When it comes to losing weight and getting into shape, victory is achieved by a combination of willpower, consistency, and responsibility. If you’re resolved, unwavering, and are responsible for what you eat and how you move, you can achieve your objectives and get noticeable results. It just takes some essential building blocks to get to this victory. Finding the best possible weight reduction center, assembling all organic weight reduction supplements, engaging in cardio molding, and putting together a proper diet could be more than a little challenging. Weight loss bootcamps are another alternative for losing weight in a healthy manner – one that you’ll enjoy – and where you’ll learn some valuable skills in the process!

weight loss bootcamps Burn fat to get in shape

Using Wing Chun Kung Fu and kickboxing as well as other martial arts, our kung fu family can work out four times a week ranging from 40 minutes to almost an hour. This weight loss boot camp get the results any weight loss program can accomplish. From power training, to equilibrium and even cardio plans and survival actions, you get all of this in an air conditioned facility in downtown Lakeland, Florida. The trainers at Sifu Och Wing Chun will drive you to your limits to get your very best.

With the team training with you and assisting you with each exercise, you’ll achieve the results you’re looking for at the same time you’re incited and urged on by what you see happening over time. With our Lakeland Florida weight loss boot camps you get to train in our completely equipped large downtown facility.

Join even if you don’t know any exercises

The weight loss boot camp workouts at Sifu Och Wing Chun are dependent on your own pace. You don’t need to be fit as a fiddle to become fit as a fiddle. Since the greater part of the activities are dependent upon the time you put in – anyone can get good results! For example, you may do only 10 crunches in 40 seconds, but another person might do 30 during the same time. Both will experience gains over time. In this way, ALL levels of people can do this work, and everyone will see results!

Kung Fu is well-known for its suppleness as well as fitness. Wing Chun Kung Fu, in particular, uses movements that are perfect for weight loss. Additionally, kickboxing uses conventional as well as proven modern scientific techniques that deliver quick results in addition to body sculpting. Lots of places might provide kung fu boot camps, but they may provide only a single alternative (a boot camp class, or maybe a kickboxing class, or even a self-defense class, etc.) Sifu Och Wing Chun’s weight loss bootcamps give you something more. We give you all of these options together with some very helpful kung fu and kickboxing training.

Sifu Justin Och and crew traveled to the Gainesville Dojo on International Wing Chun Day.  A Dojo unlike any other Gainesville Florida Keith Teller, Hanshi Master, owner and operator had a vision and has made that vision a reality.  Keith Teller has created a place where Masters and practitioners can be found from all different systems under one roof.  Train in Brazilian Jiu-Jitsu, Choy Li Fut, Kickboxing, Wing Chun, Kung Fu, Kenpo, Taekwondo or Kali you decide who you pay and how often you want to train and in what system you want to Master.  Almost each system within this one gainesville dojo is taught by a seperate Master instructor in their field of martial art self defense.

Many Systems, one location

In my opinion you should always do a trial and check out as many systems and schools as you can before making a final decision on where you want to spend your years of training and dedication. Better to see and know that the school your in is exactly what you want before you join and dedicate a life time of passion. At the Gainesville Dojo you can explore multiple systems under one roof. Though many may find it unbelievable that they wouldn’t mind you trying, training and attempting several classes under several different Masters before dedicating yourself the Gainesville Dojo does exactly that.

Owner Keith Teller, Hanshi is a teacher by day and makes sure that everyone knows that even if you are training with him and feel as though switching to a different system would be better for you, he just wants you training. Since there are so many instructors under one roof you have a large variety of martial arts to pick from. Though my personal belief is that dedicating yourself, your time and effort should be a course not taken lightly.

If you find a system that fits your fighting style and methods stick with it, master it and become exceptional at it. Chasing and training under many systems at the same time can not only confuse you but also hinder your Mastery, reaction and understanding.

The Gainesville Dojo is an assortment of systems and masters but once you find one or two stick with those, gain and train with those instructors and really gain a hold on what they are wanting you to learn and use.

Sifu Justin Och and Master Keith Teller, Hanshi got acquainted on International Wing Chun Day when Sifu Justin Och visited his large dojo. With a boxing ring, tons of heavy bags, floor mats, separated areas for training a variety of styles and systems of self defense. The Gainesville Dojo has a old school “Rocky” gym feel with a foshan china multi-school mentality.   With the principles of combat and fighting both internal and external are welcomed at the Gainesville Dojo.

Western Boxing – The Boxing class will give the individual basic techniques, footwork and proper use of equipment used in boxing training.

Kickboxing – The kickboxing program teaches the correct punching and kicking format for competition or for protection. The class is a mix of American kickboxing and Western boxing with some Muay Thai boxing techniques.

Kenpo Karate – Kenpo focuses on striking vital points of the body.  Kenpo is a hard style martial art that strikes and counters with power and strength.

Kali – Kali uses weapons such as sticks, knives and swords but also can be practiced without weapons by kicking, striking and grappling.

Wing Chun Kung Fu – Wing Chun trains a practitioner to react and respond without thought, it trains speed and devastation into the bodies natural want to protect and respond creating a system of direct, simple and controlling techniques that keeps the assailant one step behind the wing chun practitioner.