Which is the best martial art for street self defence 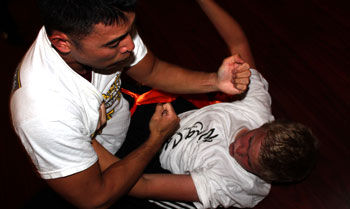 Some martial arts disciplines are also for aesthetic purposes. This means, they are only really good for performances and formal staged fighting. Krav Maga Wing Chun are the best street self defense martial arts. Krav Maga Wing Chun is a self-defense system created based upon the street fighting skills. Krav Maga Wing Chun, its meant to be the best marshal art in the world. Fancy movements, large open attacks, flipping and jumping are truly wonderful to watch but will not really help you in a home invasion, bar fight, parking lot encounter or worse a situation where your family is endanger. 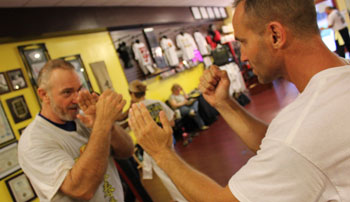 Anyway, back to the devastation which is Krav Maga Wing Chun.  Don’t let the word Kung Fu fool you, Wing Chun is a brutal style of close quarter combat.  They get in quick, they trap your arms and stike you in the throat/ribs/or/face at the same time, they kick out your legs and are not one trick ponies.  The whole art is based on brutally punching, kicking and beating your opponent into a smashed paste, but so is Krav Maga.  Krav Maga has pulled aspects of Wing Chun into its art because it respects this style so much, so much love. Wing Chun teaches mostly close quarter in-fighting punching and striking techniques, though there are some seriously dangerous moves even at a distance.   Wing Chun has very destructive and powerful low kicks to the knees, groin and ribs which don’t take alot of stretching or flexibility to use.  Wing Chun also punches, elbows and chops at the eyes, throat, ribs, neck, joints, arm breaks, knee breaks, headbutts and loves to trap and attack simultaneously.  If you are lucky enough to find a Wing Chun school that teaches ground self defence, knife and gun tactics you will be privy to a amazing arsenal.  It can be taught to women, men and children that are looking to quickly stop larger and stronger attackers in a quick manner.

Krav Maga is more of a militaristic martial art in that it focuses alot on combat encounters such as a AK-47 or other Military gun being pointed in your face.  Krav Maga also teaches kicks, grappling, knife, gun and other types of military scenarios. Wing Chun schools such as Sifu Och’s Wing Chun school in Lakeland, Florida, Wong Shun Leung Ving Tsun schools in Europe such as Philipp Bayer’s are great street self defence schools.  These guys teach these knock out street fighting Wing Chun aspects as well but from real serious scenarios such as home invasion, parking lot, and bar scenarios. Though Krav Maga also teaches a lot of scenario techniques as well such as chokes, bear hugs, knife attacks, and shirt grabs.  The same type of scenarios are in both Wing Chun and Krav Maga and they both want you to just react, react, react or laugh out loud… attack, attack, attack!  The best offence is a amazing defence right, Wing Chun and Krav Maga have both! Both of these street fighting and self defence styles teach how to knock out or kill in the advanced levels.  Both Kra v Maga and Wing Chun were developed for war and real street self defence.

Krav Maga or Wing Chun?  I personally would recommend Wing Chun unless you live in a area of the world that has been torn asunder by war or terrorist.  Not to mention that Wing Chun has aspects that suit every age and size, drills and applications that can keep you advancing into your 80’s and 90’s. Wing Chun’s fast rooted and structured attacks will increase your self defence while in a family environment. I would also say that in my opinion Wing Chun is better for day to day street self defence in most countries as they focus on the close quarters of practical fighting.  I personally in all my years have never been approached in a street fight by guys carrying automatic weapons and bullet proof vests.  If I did, I get out of there first before I said hmm time for my Krav Maga or Wing Chun training. 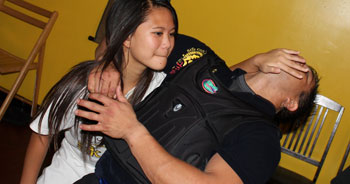 an unbaised opinion from a guy that loves to fight –

If your wondering why I left out MMA (mixed martial arts) cage training and JKD (jeet kune do). I left out MMA (mixed martial arts) cage training as there are many rules and the street has none, though it is very effective I would have to say most schools do not cover knife, gun, stick or reality situations that may be encountered on the street.  Such as you get a guy to the ground and he pulls out a knife or hey, lets just say he is standing and trying to cut you… when did your MMA (mixed martial art) coach go over that for the ring?  I am leaving out Jeet Kune Do as I love the practice and idea but finding someone that actually has a root in Wing Chun teaching it is getting near impossible. Wing Chun was hailed by Bruce Lee as the huge fighting engine for JKD (jeet kune do).  To hear some JKD instructors actually say Wing Chun doesn’t need to be learned as part of the system is like saying pressure and close contact shouldn’t be part of Jiujitsu .  It’s hard to admit but most of the JKD (jeet kune do) instructors I have seen now only have a understand of boxing, muay thai, some jiujitsu and some takedowns, which is unfortunate.  If a JKD (jeet kune do) school is missing a big handle on using and understanding the Wing Chun fighting aspect then I would have to say its more MMA than Bruce Lee JKD. With much love and no disrepect I stick with my choices of Krav Maga Wing Chun as truly devastating stand up striking street self defence martial arts.

Who was Ip Man? Wing Chun is popular thanks to Hollywood movies and its flashy style and no-nonsense self-defense...
Read More
Contact Info