The idea that Wing Chun has no long range “game” has circled the internet for a while. It is true that Wing Chun focuses its techniques on “in” fighting but that does not mean it is not effective further away. Wing Chun, although it has longer range techniques, simply prefers to close the distance as soon as possible. This may give the impression that there are no long range techniques to those unfamiliar with the art.

To understand this topic one must remember what the goal of Wing Chun is: to end a fight as quickly as possible. Many people consider Wong Shun Leung to be the greatest fighter to come out of Ip Man’s training. This can be attributed to his history of Beimo fights. As the story goes he won between 60-80 street fights all in under 3 seconds. With Wing Chun creation at a time of war this makes sense. One needs to end the fight as quickly as possible. That in mind, lets explore the idea of long range fighting versus short range fighting.

There are 3-4 main ranges in martial arts depending on who you are talking to. Striking (Kicking and punching), trapping, and grappling. Each range has it’s advantages and disadvantages. Striking is the range with boxers and Tae Kwon Do Fighters. Grappling is the home to Judo and Bjj Practitioners. Trapping is found between the two and is where Wing Chun mostly operates. For this discussion we will focus on the Striking range versus the trapping range. Examples of “Striking” range attacks would be a boxers jab and cross or a Tae Kwon Do fighters roundhouse and spinning back kick. Examples of a “trapping” range attack would be a Paak Punch or Huen Sao strike in Wing Chun.

The main advantage of the Striker is distance. If a striker can successfully fend on an opponent they can never enter into the other ranges nullifying their abilities. Quick foot work combined with deceptive fakes can quite difficult to deal with. Wing Chun seeks to close the distance as quickly as possible. However, if the Wing Chun practitioner cannot do that, it may be difficult to end the fight.

So then how does a Wing Chun fighter deal with an opponent that will not commit and fully engage at the same range? There are specific techniques that need to be used with certain attacks but before that even happens there must be the strategy. The strategy is baiting. The techniques come from Wing Chun’s ability to use 2-3 “weapons” at the same time.

Let’s look a the strategy first. If the opponent tries to stay “out of range” the Wing Chun fighter must draw in the opponent until they through a committed strike. When they throw that strike the counter must be fast and ferocious. Jabs and front kicks are to of the main weapons seen when trying to keep an opponent away. Trying to counter these can be difficult due to their speed. These are best deflected with an equally quick defense. Man sao’s, Paak Sao’s, and Jum saos are usually the most effective. 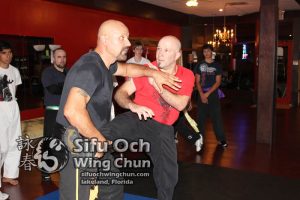 With the strategy in place the Wing Chun fighter can counter. Again, the emphasis must be place on using multiple weapons at once. When the opponent throws their “knockout” strike they must be overwhelmed immediately. If not they will retreat and continue to attempt to break down the Wing Chun Fighter. Against crosses Paak Punches and Intercepting Fist strikes do well.But to prep the counter a shadow kick to the lead thigh slows down the movement of the opposition. If an opponent throws a kick one of the most effective tactics is to kick out the support leg. These can be done simultaneously with a block when used against roundhouses. When a front kick is through it should either be passed off with a jum or it can be caught. Once caught the support can then be accessed for a kick or sweep.

Wing Chun’s Weakness is the student

The idea that Wing Chun has no long range game is not necessarily correct. Rather, Wing Chun seeks to disrupt the core of the fighter which can only be done when close to the opponent. Therefore, the Wing Chun fighter simply closes the distance as quickly as possible. When a ranged attack it should be countered and then followed with and flurry of overwhelming attacks that do not allow for a recovery. Wing Chun as a system as many tools at it’s disposal, whether they are used correctly is up to who uses them.

Never Give Up in Wing Chun

What do you think of when you hear the word "success"? We compiled some of our favorite Never Give...
Read More
News

Top 10 Reasons to Send Your Kid to Summer Camp

Top 10 Reasons to Send Your Kid to Summer Camp: the benefits are infinite! But for the sake...
Read More
Contact Info