If you want to learn truly effective gun and knife offense and defense training, our Advanced Wing Chun Training classes will set you on the right path. Flashy techniques, jumping spinning kicks, or moves that have you “strip or snatch” the knife from the attackers hands are not aimed or forged in real-life street fighting. Rather, they’re forged in theories of what “could” happen against willing participants. F.O.P. (Fresh Out of Prison) is a scary but realistic thought, F.O.P.’s have been in bad situations, close quarters and know how fast a knife attack goes down. Think of a man in front of you, holding his hand to his side, then out of nowhere he pulls a knife and starts stabbing repeatedly at your stomach, face, chest, and throat. This is how a real-world situation can happen, and there is no time for flashy movements. You won’t be able to kick the knife out of the person’s hand, spin, or perform a jump kick. Stripping or snatching the knife is equally unlikely when a real-world confrontation occurs. 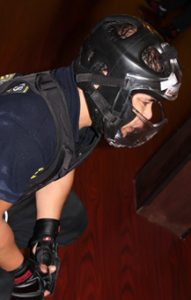 Our Wing Chun gun and knife offense and defense training teaches you how to quickly react to save your life. It teaches you how to stop and control the delivery system (the arm). Wing Chun gun and knife training doesn’t want you worrying or training on knife stripping, stealing, or snatching. Instead, we teach and train you to deal with the threat at hand and stop the delivery. This aspect of advanced Wing Chun training is about surviving a potential knife attack against you and those you love. Effective protection is key, and knowing, applying, and training is half the battle. In today’s world, people who carry knives are merciless, and training complicated moves because they look cool or “feel” cool is not effective.

We train in a safe and friendly environment, but the truth is that the training is real and critical. Everything you learn in Wing Chun can be applied, whether in hand to hand combat or gun and knife defense. The thought and training is the same: What is the fastest and most effective way to strike, attack, and defend? We also train you to ask yourself: How do I get myself in and out of this situation right now? In any confrontation you need to end the fight instantly. You’re not worried about rounds, you’re concerned about seconds. You need to learn how to shut down, disable, and strike areas that no man can build up and which will send your attacker reeling. Master Sifu Och’s advanced Wing Chun classes train you in realistic self defense so you can have the best chance to get out alive.

Check out our Advanced Wing Chun Training and Classes page.

High power attacks come with high risk (this article can not be copied or used on any other site,...
Read More
Wing Chun Theory

A lot of experienced and inexperience students come from various backgrounds, but should you fear Wing Chun training? We...
Read More
Contact Info