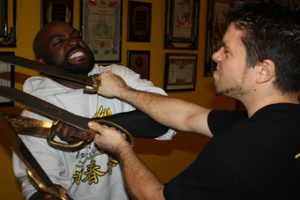 A weapon of choice for any close quarter combat practitioner and specialist, the Eight Slashing Swords called the Wing Chun Butterfly Swords are known as extensions of a Wing Chun fighters arms and hands. The speed, the reactions and the power of a Wing Chun Master practitioner are only increased exponentially by a weapon so forged and seasoned for one purpose. Mastering Wing Chun allows you by extension to master other aspects of fighting, much like the warriors of past their swords were extensions of their body. Wing Chun Butterfly Swords are highly adaptable in today’s world as combative partners in realistic self defense. Similar butcher knives these Shaolin weapons of concealment were trained to increase the strength of a fighting practitioner as well as increasing the speed and power of the shaolin kung fu figher.

Since the Wing Chun Swords (Bart Jarm Do) were easy to conceal and used as an extension of a Wing Chun practitioners arms they were by far the most deadly and effective weapon. There traditional and modern use of trapping, immobilizing, simultaneous offense and defense all while counter attacking and using the entire Wing Chun way of fighting is astounding. The advanced Wing Chun classes in Bart Jarm Do Swords emphasizes the coordination of both sides of the body and mind all while pushing the limits of fast hand-eye coordination, quick reaction and rooted footwork. It’s design was that of concealment, full capability and proven principles.

There are many names for the Wing Chun Butterfly sword such as; bart jarm do, bot jam do, butterfly knives, eight slashing swords (8-slash knives), baat jaam do, bart charn dao, ba zhan dao. No matter what the name, the swords are a diverse weapon of choice amongst modern and traditional Wing Chun practitioners. Through there use and practice you strengthen your forearms, wrist, triceps, biceps, chest and back. Think of a boxer with weights in his/her hands while practicing, now imagine that boxer had to practice directional fighting, forward and backward attacking all while using weights. The strength, flexibility and power you can gain from these “butcher knife” like weapons is amazing. Through their use and practice you will also find a better center of gravity, rooting and foundation all while reinforcing your Wing Chun fighting techniques. With this comes a greater ability to redirect, attack, counter and move not to mention fighting against other weapons and poles. Since the Wing Chun Swords are an extension of your hands and arms 99% of Wing Chun techniques can be used with the Wing Chun Swords. This makes them a versatile traditional and non-traditional weapon much like hand knives, guns, kali sticks, escrima weapons and more. 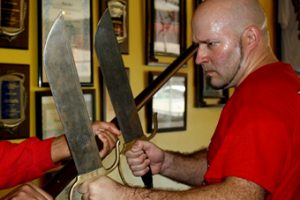 Though we are not Buddhist, the swords were used and originally forged by the Shaolin Monks who in there religion forbid killing at all costs. Traditionally the swords were only sharpened at the top making the slicing, chopping, cutting or slashing techniques mainly those of blunt force trauma instead of death. They believed that a person should be given a chance to learn from their mistakes instead of dying because of them. This meant that the Shaolin Monks broke bone, tendon or limbs during war and battle for country and self freedom. When not on the battle field or being attacked by bandits the Shaolin Wing Chun Swords folded upon each other for concealment and making them look like one weapon. The Shaolin Wing Chun Swords blade length is equal to the length of the forearm to the fist. Wing Chun butterfly swords are designed to close in a close and medium range, with hand guards made like brass knuckles to strike and smash the opponent using strikes and punches. The Wing Chun Swords are design with a hook to lock or hook the opponent’s weapon as to immobilize or trap them momentarily so you can strike, hit or slash freely.

No one can argue that Bruce Lee possessed a powerful and muscular physique. Along with that, most people admire...
Read More
Wing Chun Theory

Fighting Fitness – Are You Fit to Fight?

Asking the question: "Are you fit to fight?" and knowing your personal fighting fitness is something you want to...
Read More
Contact Info