Blocking and Attacking: 5 Moves for Disruption

One hit. Sometimes that’s all it takes. One well placed hit can end a fight. Power, speed, accuracy all come in to play. If you can accomplish that one hit, it can make the difference between making home alive, or not. You must use every advantage possible when defending your self. Wing Chun’s system of blocking and attacking at the same time is one such advantage. It allows you to disrupt the opponent’s timing and structure immediately. “Blocking and Attacking: 5 Moves For Disruption” will show you 5 moves you can use to gain the upper hand and hopefully land that one hit.

Blocking and Attacking: 5 Moves for Disruption 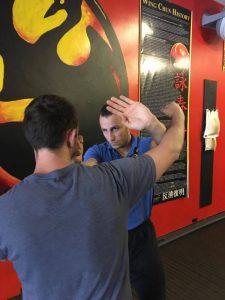 The Bui Sao is going to be one of the most common moves to use in a self defense situation.The reason for this is the the hay-maker is one of the most used attacks by an untrained person. Swinging their arms by throwing their body weight causing a very wide attack. They leave their center wide open which allows one hand to press out and block the attack the second hand to fire straight forward at the assailant. 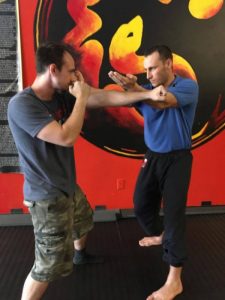 The Tan Punch is a versatile technique. It can be use from the inside or the outside. Though not preferred, if an opponent uses a hook you can stop the hook with tan and then hit with the punch. If a straight punch is thrown you can redirect it to the outside or the inside depending on the circumstance. So, use it to smash through an attack, redirect a heavier one, or even break out of grips. Pressing from the front foot with the palm up and attacking with the other hand.

The Paak Punch is a great tool to use when trying to quickly close the distance on an opponent or to transition from one side to the other. Use one hand to parry, or block an opponents oncoming strike. The other hand will deliver a strike either above or below the opponents arm. There are two ways to use the Paak. You can use it as more of a parry, deflecting the opponents strike off. Or, to completely stuff the punch back into them.

If the opponent is much taller than you it may be hard to reach their neck or head. Simply change your target to their rib and use the deflective Paak. Once you have hit their rib you can either come straight back up and strike the face with a palm. The pain in to the ribs causes the opponent to bend down allowing for this strike to happen. Otherwise, you simply paak his arm directly back toward his centerline, and punch is face.

Jum Out Side Low Shadow Kick 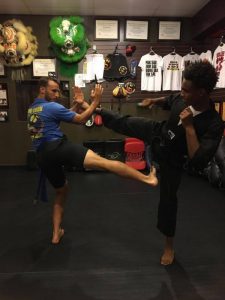 Round houses to the head are very dangerous. Using a Jum Sao is a very effective tool to deal with the most powerful round houses. Press outward from the shoulder to the elbow. Both hands up creating a wall. With this Jum Sao set in place you can not only block the kick you can also kick out the base leg illustrated below.

A kin to the Double Jum Low Outside Shadow Kick is the Quan Da Tong Kick. The is done with a Low Bong Sao and a Tan Sao to block the roundhouse. Instead of kicking the leg the chest will be kicked. To do the Tong kick, tilt your foot inward and press with your heel, similar to a front kick. This strike is deliver right to the sternum. Block the opponents roundhouse properly and kick correctly, and you will send your opponent flying.