Wing Chun’s long pole luk dim boon Gwan, known as the dragon pole, employs a devastating centerline fighting principle with the distance of eight to thirteen feet. Using the strength and reinforcement of the entire body the pole has fighting use of its sides and frontal striking power at the tip. Long pole weapon fighting training is saved for those students who demonstrate they understand the basic fundamentals and are ready to begin the intermediate to advanced training these weapons provide. Remember that advanced Wing Chun classes in weapons are an extension of your empty hand training. If you don’t know the basics of your art, how can you wield, use, and understand a weapon which doubles to triples the difficulty of balance, precision, strength, and endurance? 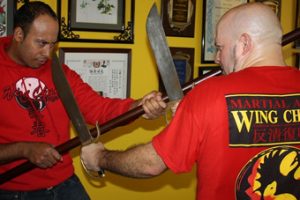 There are many stories about how the long pole had its beginnings throughout the history of Wing Chun, one of those stories is that Leung Yee Tai was taught the dragon pole techniques from Abbot Chi Shin. He was one of the Shaolin monks that had made an escape during the destruction and burning of the Shaolin Temple by the Manchu Government. Abbot Chi Shin was hiding on the red junk boat opera troupe as a cook but in all truth was from the Shaolin monastery. Another Story tells us of a Hung Gar (Hung Kuen) master who worked with the boatmen of the red junk boat. He taught them a fast way of developing great internal power and huge strength that could be assimilated into their Wing Chun training. The simple and fast fighting movements of the dragon pole (luk dim boon gwan) were perfect counterparts to the Wing Chun system. This also shows us that Wing Chun was willing to learn, adapt and give respect to all arts. We are not a system that shun’s other arts but welcomes there fast, simple and effective means at which to end a fight. Wing Chun’s focus in training is in reactions of the fighting mind set, reactions are not fancy they are direct, reactions are not big or flowery they are direct and always centerline. The fighting mind of the dragon pole fighter (luk dim boon gwan) must always be on the most direct and effeicent way of using the pole. The fight must start and end quickly and the drills must build as much internal power as they do external power. You become a fighter that has one goal and one purpose.

The dragon pole (luk dim boon gwan) was used historically as a boat pole, used to guide and push the boat away from rocks as well as to move it along. Much like poles are used on Gondolas in Italy. These poles have different histories as how they got there beginnings in Wing Chun. 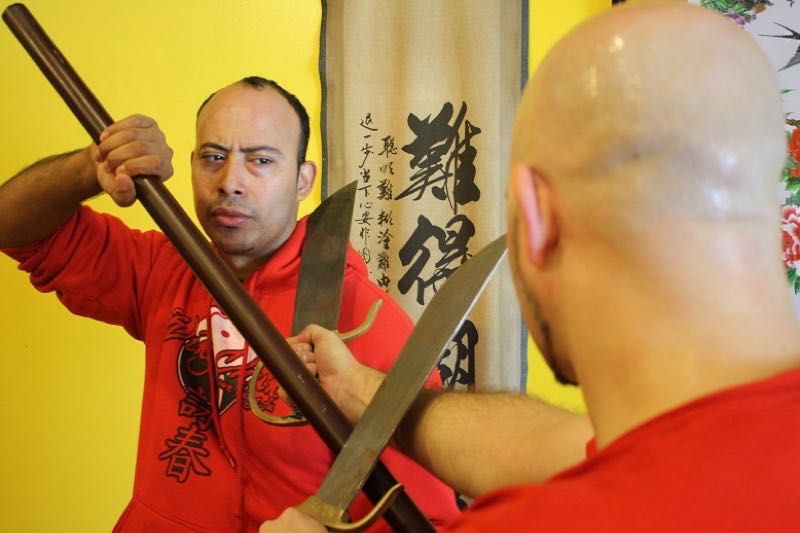 After the Manchu Government gained full control of China the outlawed all all forms of weaponry so to restrict and keep hold of the Chinese. The Manchu government restricted the work of the Hon’s (Chinese), increased their taxes, burden there economy and forbid them from reaching the higher levels of government office. The Manchu government also forbid and banned the Hon’s (Chinese) from any type of Kung Fu training. Since the Manchu Government had the same religious beliefs of the Shaolin Temple they allowed there training to continue, this proved detrimental as the Shaolin monks created a new system of Kung Fu called Wing Chun that didn’t take the 15-20 years most other styles of kung fu take to master and use.

The Art of Wing Chun survived the Manchu destruction of the Shaolin Temples and went underground in concealment, assassination and espionage. These Wing Chun master were not always monks and did not have the same religious or moral restrictions as their previous instructors. These Wing Chun rebel’s would hide upon boats as actors going port to port from southern to northern china, using back alleys to take out Manchu generals and high ranking politicians. Wing Chun’s concealed weapons, fast hands and quick reactions were ideal for these close quarter fights. Sharp side or not, imagine getting hit in the neck, joints, ribs, face, wrists, arteries, veins or tendon’s with the speed and precision of Wing Chun with the steel and brass of Wing Chun Butterfly Swords. Trust me, getting hit the blunt side of these Wing Chun swords is enough, the power and speed in this traditional weapon are absolutely incredible and should be respected.

The idea that Wing Chun has no long range “game” has circled the internet for a while. It is...
Read More
Wing Chun Theory