In our previous article, Martial Arts Philosophy-Chinese Versus Japanese Part 2, we covered the Chinese side. In this article we will go over Japanese martial arts. Japanese martial arts bases its principles heavily on certain beliefs—religious or not—depending on the style. Shintoism (an ethnic Japanese religion) is a strong fundamental in the art of Aikido. Even some of the religious beliefs from China managed to merge its way into the countries martial arts; Zen (Chan) Buddhism became a respected principle in the art of Bushido (way of the warrior) and Budo (martial way). For most Japanese martial arts the same purpose applies to those of Chinas: focusing development of “The Trinity” (body, mind and spirit).

Shotokan Karate, developed by Gichin Funakoshi, bases its precepts closely on Zen Buddhism and Bushido. From these two philosophies Funakoshi laid out the twenty principles of Shotokan philosophy. Later the five Dojo Kun was developed by the Japan Karate Association. Under no circumstance should one of the principles be valued more than another. By taking those into account, and through years of practice, a karate practitioner (karateka) will be able to develop a calm and opened mind and achieve confidence, humility, wisdom etc. In addition to that they will hone the body to become harmonious with the mind which will give a “subconscious” control over the body’s movement. The body performs the techniques while the mind remains serene. This will then have a direct proportional effect on the spirit as well and will create a wholeness of one’s self.

Some of Zen’s religious principles are also structured in the art of Aikido though the bulk of it comes from the countries traditional religion of Shintoism and its strong belief in spiritual essence. Aikido, founded by Morihei Ueshiba, centers its techniques on the flow of ki (also known as chi or qi in Chinese culture) that translates to “life force” or “energy flow”. Ki is universal—everything possesses it—and it can be a means to transfer external energy internally. Internal ki is channeled throughout the body by the mind that in turn channels the power. Only when mind and body are harmonious can this be achieved and used to redirect and neutralize the energy of opposing force.

The art of Aikido also believes in the value of self-discovery and self-development and discourages any form of hierarchy. It’s not an art used to distinguish which is superior over the other; it is only used for means of protection. This also applies to winning and losing which is why the art disapproves contests and competitions. 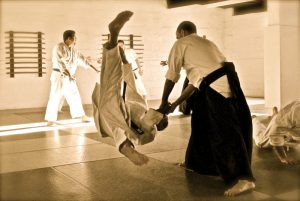 In conclusion to both articles we want touch on modern arts. Both Chinese and Japanese arts share a common bond of self development at their core. Through training practitioners sought enlightenment. In modern training the focus is not so much on self development as it used to be. Many arts now serve to prepare students solely for competition. Instead of helping student’s become better people they only focus on techniques and tactics to win medals.

Although schools still do exist that instill strong principles, it is not part of the modern martial art culture. Not even mentioning what can be called “black belt factories”. Schools that seek to do nothing but move student’s through for financial gain. These types of schools will wave flashy promises of black belt awards if x amount of money is paid. Or some will simply skim the surface of an art so that students can breeze through the material. As a result many “black belt” students come as a result.

Whatever you train, Chinese, Japanese, or any Modern art you find, seek to grow as a person.

Jeet Kune Do in Lakeland Florida