The Chinese Lion Dance is a celebratory dance usually enjoyed around Chinese New Year and other special occasions. Two dancers perform each lion, one as the head and fore-legs, and the other as the butt and hind-legs. The dancers both wear pants to match the lion’s fur, with one dancer under the oversized head, and the other bent over under a covering of “lion’s skin.” They then imitate lion like movements such as leaping, napping, scratching, and chasing their tail. The dance is usually accompanied by drums, cymbals, and a gong; playfully, and with lots of crowd involvement. This article will discuss the origin of the Chinese Lion dance and variances in style between the north and south.

Three legends exist in the Chinese culture that try and explain the origins of the Chinese lion. The first tells of a Monk who had a dream many evil spirits were about to attack China. The Monk prayed to the gods to send him a means of saving China from these evil spirits; his prayer led to a vision of a lion. Never having seen a lion before, the Monk created his own version of a lion from creatures including a dragon and unicorn – explaining why the Chinese lion does not resemble actual lions. The second legend tells of a visiting neighbor country who gave the Chinese Emperor a lion. The Emperor loved his new lion, but could not tame its’ aggressive nature. The Emperor commanded many civilians to the taming of the beast, but it was a Monk who was finally able to calm him. With pride, the Emperor showed off his new lion all around his country and stories of the incredible animal spread. The third legend tells of the animal coming down from heaven. Instead of having the natural traits of a lion, this lion was playful and enjoyed playing pranks on the country. At one point, the lion played a joke on the Emperor, enraging him so much that he cut off his head! A Chinese goddess witnessed the beheading and as a result tied his head back on with a magical red ribbon. She then gave the lion a mirror and a horn to drive away the evil spirits. 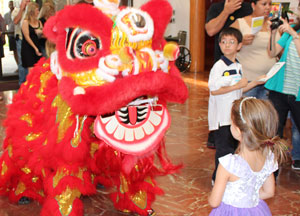 Despite coming from similar origins, Chinese lion dances vary greatly between the North and the South. The Northern lion dance is popular north of the Yangtze River. Performed by either one or two people, this lion is often smaller than the southern lion. Covered in tassels, this lion will act surprised, scared, and happy, while climbing, squatting, retreating and rolling. This lion is usually accompanied by a lion tamer, or warrior, who will lead the dance. The focus for the northern lion is on kindness and dexterity. The southern lion, also called the walking lion, is most popular in the Lingnan area of China. These lion dances are more athletic, incorporating jumps, moves, and attacks. The lion will progress through 8 stages of being: happy, sad, joyous, moving, resisting, surprising, and suspicion. Both lions, however, are rich in color and energetic movements.

Today the Chinese Lion Dance is performed by martial artists all over the world, for a myriad of occasions. At Sifu Och Wing Chun, our martial artists practice the dance and have performed for many different audiences. You may see a Chinese Lion at a wedding, a grand opening, or even a birthday party. Significance of the lion will vary between individuals, with some believing in the lion as a great source of fortune and good luck. No matter what the occasion, the lion never fails to bring smiles and good cheer to those around him.