If you have not read part I of The Kickers Guide, please take a minute to do so before jumping into The Kickers Guide H-Z (Part II)! As mentioned in the previous article, every martial art that uses these kicks does so in a multitude of ways. None exactly the same, but each useful to their art.

A hook kick is simply a side kick that misses its target and draws back to hit with the heel. This emulates hook punches in that it is much more difficult to block than other kicks, as it hooks around the opponents guard. This kick is often aimed at head level or upper torso.

The hurricane and tornado are both spinning jump kicks that are very similar in nature and execution, but with a few differences. For the hurricane kick the front leg initiates the spin, as the back leg comes up for the first strike. The first strike is a reverse half moon kick (mentioned in Part I), immediately followed by a half moon kick from the other leg. Both kicks occur in the air with neither foot touching the ground.

The tornado kick is nearly identical, except the final strike is a round house instead of a half moon kick. In addition, the first leg is more of a primer than an actual strike. Both kicks, however, aim to hit the side of the body/head and can be interchangeable. The tornado kick may provide more power due to the nature of the round house, but the hurricane gives a greater ability to stay square and facing the opponent after the last strike.

There are many acceptable ways to perform a round house, but they all begin with a raised knee. The round house may attack any part of the body, but the height of the target sometimes alters the nature of the move. For low kicks, you almost always want the kick to come at a downward angle; with the foot loaded above the knee, coming down to hit its target. This is more difficult to do if you are aiming for the head and most styles will allow the foot to come upwards to meet this target.

The term scissor kick is more of a category of kicks encompassing any kick that resembles a pair of scissors. This kick can refer to a double leg sweep from the ground, a double kick striking two targets in opposite directions, or even a crushing motion done to something in between the legs.

The name of this kick originates from the idea that the technique takes place in the shadow of the practitioner’s hands. This means that the practitioner should be capable of performing the kick off the front foot while hand maneuvers are being executed. The technique itself is exactly like the half crescent kick except instead of being aiming at the ribs in a forward thrust, it aims at the knee a in a downward stomping motion. 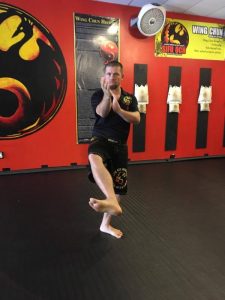 The side kick is useful against opponents that are already on the right or left sides of our bodies. It can also be used simply as a powerful kick. This kick has great potential for power due to the load that comes up and across the body. The foot is then sent out in a straight line to meet the target. This is different than other kicks. Most of the mentioned kicks take some sort of circular or angled route to their target; thereby cutting their power. 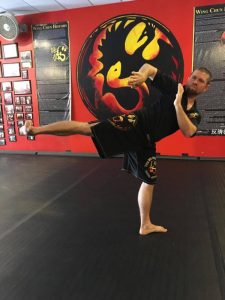 Similar to the round house, however, this kick comes from the inside out. The knee comes up to the chest. Foot angles in past the centerline of the body, then kicks angled up with pointed toes. This kick frequently attacks the side of the head or ribs.

Many of these kicks can be doubled as spin kicks, jump kicks, spinning jump kicks, or running-spinning-jump kicks. The possibilities are endless.

The idea that Wing Chun has no long range “game” has circled the internet for a while. It is...
Read More
Contact Info