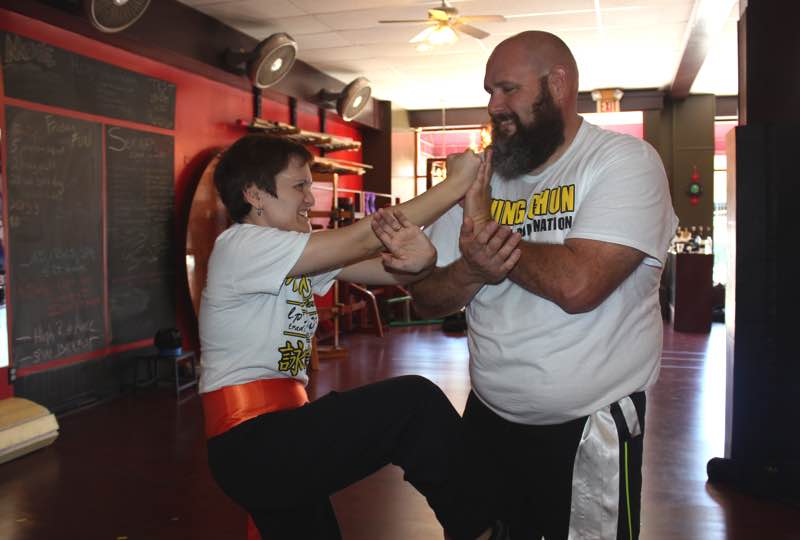 If you had to move some furniture, two friends definitely come in handy. What if you were painting a house? Two more painters would make things a lot easier. If you’re in a fight, wouldn’t it be nice if you had the ability to use three of your “weapons” simultaneously as opposed to one? With Wing Chun stances and rooting this is possible. After all, fighting three against one always presents an advantage.

When you’re in a fight you need to take every advantage possible. With many popular styles (Tae Kwon Do, Karate, and boxing, for instance) only one hand or leg is used for attacking (generally speaking). In Karate and Tae Kwon Do the back hand is kept chambered by the side ready to be brought back into the fight with either another strike or block. In boxing, it is kept close to the chin to protect the body and head. One punch is all it takes to end a fight sometimes, but that punch could go either way. Leaving one entire side open to attack is a very dangerous gap in your defense. To keep both hands in the fight, Wing Chun keeps the whole body facing forward. This also gives you the ability to combine strikes, blocks, and counters with a shadow kick or half crescent kick.

Fighting Three Against One – Limbs, That Is

A common combination of all three would be a Tan Sao punch and half crescent moon kick. This is typically utilized to counter an attack from the outside (i.e. a boxing cross moving diagonally across the body). It uses one hand to block the attack, one had to punch the face, and the kick is placed in the ribs. With all three tools being used, the attacker has now been completely caught off guard. Not only has their attack been nullified, they have been knocked off balance with the punch and potentially have broken rib from the kick. With the entire body lurching forward as one unit, a flurry of devastating attacks can be used to follow up.

“If you have an army, why pull away 2/3rds of it during a fight? Keep your whole army ready at all times.”

Having the mentality of keeping all weapons forward keeps them readily available which helps decrease reaction time. Since all three weapons can—and should—be used, it makes reacting to an attack easier. Even if you aren’t fully confident with your technique or reaction ability, having all three weapons primed to be activated can greatly increase your chances of defending an attack.

More Than Being Ready

But having the weapons ready is not enough, however. They must be combined with forward intent. A Tan Sao is completely ineffective in stopping a punch if it is not pressing forward to match the incoming energy from the strike. So it is with all of the Wing Chun techniques (with a few specific exceptions).

Seeking to press forward on an attack to disrupt structure lets you attain a direct route to the centerline. Reverting back to the Wing Chun rooting and stance, the hips must be facing forward. They should fuse with the entire torso so as to move as one unit. If the attacker moves, the entire torso is rotated or “shifted” to face the attack. Much like the stance of a shooter, the weapon is not held to the side if a new target appears. The shooter turns his whole body and keeps his weapon in his center. 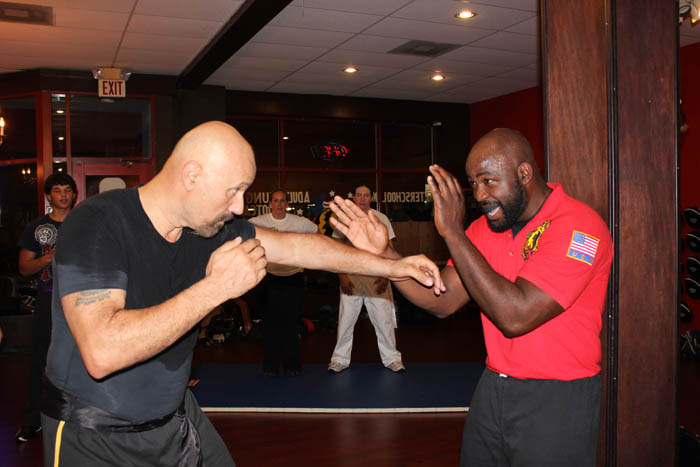 “Be like water my friend.” This quote by Bruce Lee has become famous around the world. But not as famous is the concept of becoming like a tree. This concept is summed up in one word, rooting. But what does Wing Chun rooting in martial arts do with your effectiveness? Everything!

Before rooting can addressed there must be clarification on one subject, ground vs stand up. While an entire article can be devoted to the topic of ground work (i.e. wrestling, Brazilian Jiujitsu, etc) versus Karate, or boxing, or Wing Chun, we can only touch on it briefly here. At Sifu Och Wing Chun the mentality that is present is one that favors stand up or staying on one’s feet. While Brazilian Jiujitsu and wrestling are also trained there, should the need arise, our focus is staying on our feet. Why? Multiple attackers, weapons, unknown terrain…these are just a few reasons.

The Importance of Wing Chun Rooting

Now, back to the topic of Wing Chun rooting and why this is important. No matter what art one is training in, Tae Kwon Do, Muai Thai, Silat, Northern Style Praying Mantis, rooting is essential. It’s very much tied to the Wing Chun stance and structure as well. Should an individual come upon another individual that is to any degree larger than themselves, one can almost assume a power difference in favor of the larger opponent. When that power is being delivered into another body it can only do one of two things. It can overcome a person causing a loss of structure, or it will pass through the body into the ground. This second option is the goal of rooting.

“A tree without roots is just a piece of wood”

When Wing Chun rooting is accomplished it gives the user a solid foundation to then apply any attack desired. However, if there is no structure, just as a tree with no roots can be easily blown over, so will the martial artist be overtaken without good roots. In Wing Chun the rooting is done through the heels. Similar to the form of a squat, driving through the heels is the correct way to line up the skeletal structure for the most power. This can be reversed to say that supporting through the heels is the best way to support the most weight. Reverting to the squat example, when you have 300 lbs. on your shoulders you have two options, toes or heels. WIth the weight on your toes you now have to utilize your Calves and Tibialis Anterior to attempt to keep your legs underneath the weight. Switching to the heels allows the bones to line up in a way that the structural integrity of that system to not be comprised. The weight has a direct line to be directed into the ground.

Get your rooting right in Wing Chun, and you can stand strong, redirect an opponent’s attack energy, and fight stronger.