The punch is a staple in every conceivable martial art. Even those that focus on ground work, like Brazilian Jiu-Jitsu, at least address how to defend against a punch. In short, martial artists like to punch. But when a Karate guy says punch, and a Wing Chun guy says punch, they don’t always mean the same thing. Punches across the arts vary widely and each art has its own reasoning for choosing to punch slightly differently.

When it comes to Karate and Tae Kwon Do, the punch is exactly the same. As a martial artist holding an instructor level in Karate, I figured that I would not have to research the Karate punch and moved straight into Tae Kwon Do. The very first video I found on Tae Kwon Do punching sounded like I could have made it myself and called it “The Karate Punch.” This punch primarily hits with the first two knuckles closest to the thumb. If you make a fist, you should be able to draw a line from those two knuckles straight up your arm, matching the bones in the forearm. In traditional drills practitioners will chamber at the waist or hip and strike out as the other arm draws back with equal force. However, in sparring or other applications, the punch will usually come from somewhere near the face. Practitioners use this punch because it allows for the structure of the arm to back up the power of the punch. 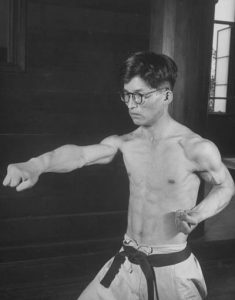 In Wing Chun Kung Fu, the punch looks a little different. Instead of a fist with fingers down parallel to the floor, the Wing Chun punch ranges between a 45 degree angle to perpendicular to the ground (depending on the school); with the pointer finger at the crest of the angle and the pinky at the bottom. These punches come through the centerline of a practitioner’s body, attacking with a square chest. The punch strikes from a state of relaxation to tension. It is less forceful than the Karate or TKD punch, but can deliver the same power. Practitioners use this punch for a couple of reasons. This punch is “invisible” because it is often more difficult to see coming. By simply taking the shortest and most direct route to its destination. It also requires the opponent to be closer, being more effective for close quarter contact. 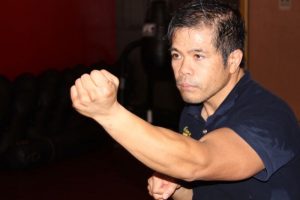 These two different variations of the punch represent either end of the spectrum. Karate and TKD on one side with Wing Chun Kung Fu on the other. Most other martial arts will fall somewhere in the middle of these punches. Tai Chi punching incorporates the relaxation to tense aspect associated with Wing Chun to the horizontal aspect of Karate/TKD. Whereas in Aikido, they do not focus as much on the techniques of the punch, rather using it as supplementary to other techniques. Muay Thai, Boxing, and Mixed Martial Arts, all utilize a punch called the jab. That is very similar to the Karate/TKD punch, but originates from a guard up by the temples and is more often used as an opening technique.

Though each martial art may punch a little differently, there are a few concepts that are generally constant. One being to engage the core. Punches may be executed by the arm, but they come from the whole body. Likewise most martial arts will encourage putting hip torque behind punches to make them more effective and powerful. As well as a strong base through structure and rooting. Even though these fine points may be difficult to visibly discern, they are what makes any punch a good punch.

The world of modern martial arts is full of commercialized schools with watered down training. In an attempt to...
Read More
News