Who was Ip Man?
Wing Chun is popular thanks to Hollywood movies and its flashy style and no-nonsense self-defense techniques. But it’s difficult to hear Wing Chun without also having the name Ip Man mentioned in the same sentence. Ip Man (pronounced “Ip-Mun”) has a very fascinating history and was integral in the modern training and perfecting of this extreme system of self defense. In fact, China Airlines has taken the Ip Man Wing Chun system and made it required learning for terrorist self defense on all of its airlines.

Ip Man was born to Ng Shui and Ip Oi-dor, he was the third of four kids.  He was born under a wealthy Foshan, Guangdong family.   At the age of 7, he began his Wing Chun training under Chan Wah-shun though due to his old age he did most of his training under the second eldest student, Ng Chung-sok.   Chan died three years later but upon his dying wish wanted Ng to continue teaching. 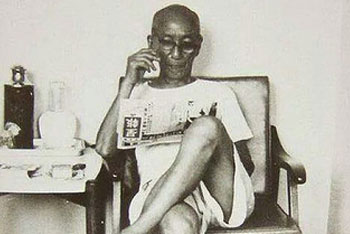 At 16 years of age he moved to Hong Kong and attended St. Stephen’s College, which was a school for wealthy families.  At this time their, he and his classmate once saw a foreign police officer striking a woman down. With no response when he asked what the woman had done or why the officer doesn’t just arrest her, he intervened.   The officer tried to strike Ip Man but instead got knocked down quickly with a short succession of strikes.  The classmate told a old man that lived in the same building of what happened and the moves that were used.  Oddly the man wanted to speak to him, inviting him to his house.  He asked Ip man what form of martial art he trained, Ip Man replied “the most powerful system in the World, Wing Chun!”.  The old man asked to see his forms, after seeing them saying “not too great” and “poor”, this angered and upset Ip Man.  The old man then asked if he knew Chi Sau (a form of wing chun close quarter reflex sparring), and he jumped at the chance to show this old man what he really could do.  Within just a few strikes the old man defeated him over and over again without effort.

This old man defeated Ip man, upset he ran from this encounter, only to find out something deeper and better. 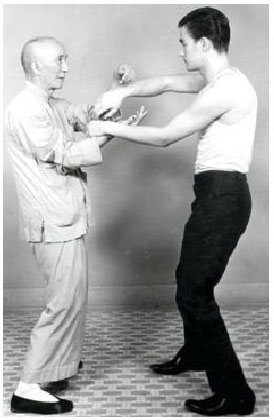 The next day while in the middle of a class at the college, his classmate told him that the old man wanted to see him.  Ip Man refused, telling his friend he would never see that old man again under any circumstances.  His classmate then told him that the old man was actually Leung Bik, the son of the teacher of Chan Wah-Shun.  With this news, Ip Man’s entire face lit up, jumping out of his seat and running out of the classroom straight to Leung Bik.

Until the death of Leung Bik, he trained with him, even inviting him into his home to stay with him free of charge as he paid him for his Wing Chun knowledge.

At the age of 24, Ip Man returned to Foshan and became a police officer teaching friends and relatives.  He became famous for using his Wing Chun to stop every level of criminal and arresting them.  During this time he knocked the chamber out of a old gun pointed at him with the trigger already pulled and half cocked, using just his fingers and the stress of the situation he dislodged the guns rotating chamber before it could fully turn and kill him.

There was once a Praying Mantis Master practitioner that came to Foshan challenging any who fight him, the martial arts Masters and Grandmasters came to Ip Man as he was in his prime and well known.   A day was set for the fight and as it approached the Mantis instructor came to Ip’s place of work.  He told him that he would crush Ip just like this pillar, as he spoke he looked at the concrete pillar closest to him and struck it, taking out a chunk of it with his fist.   When the day of the fight arrived the two stood on top of a large parsons table, surround by spectators ordering food and drink.  The moment came and the fight engaged, the Mantis practitioner came at Ip Man with a flowing barrage which was avoided Ip Man countered with his own attack knocking the Mantis practitioner backwards and off the fighting grounds crashing into a table breaking his ribs ending the fight.

He perfected his training by helping others and thinking of others.  He used what his teacher taught him throughout his life, bringing real life experience to each technique.

During the Japanese War with China Ip Man lost most of his wealth and standing.  Shortly after this, he left Foshan moving to Hong Kong in 1949 after the Chinese Communist Party took over.

After losing everything Ip Man took up opium, though in that time opium was as popular as cigarettes and had no known advertised adverse side effects.  As time went on and his students found out that negative effects of opium and switched his addiction to Camel Cigarettes. Though poor after both the Japanese War took or destroyed everything he had, he taught students the martial art system that was passed down to him.  With his students fighting and winning against many other systems and schools.  He is most well known for teaching Bruce Lee, though he had many great student fighters that were not famous or publicly known.  He found new life in the students he taught and the knowledge he passed down.

Ip Man died on December 2nd 1972 in his housing unit at 149 Tung Choi Street in Hong Kong, from throat cancer from camel cigarettes.  His death came only 7 months before Bruce Lee died.

The truth is after the Qing Dynasty sought out the destruction of the Shaolin Monks and their powerful martial arts systems most martial arts became outlawed and Wing Chun was no different, it went underground and was only passed from family member to family member.  Originally developed by the Shaolin Temple to provide a new way to overthrow this invasive Dynasty by training rebel Chinese fighters.  As time went on chinese martial arts forms became more aggressive and Wing Chun developed into a system of extreme aggressive close quarter combat that could be used by men, women and even children for personal protection.    It was in the 1960’s when Ip Man, who is now considered the Grandmaster of Wing Chun, revived this art and brought it out into the public eye.  The Hollywood legend Bruce lee is a famed student of his, Bruce Lee touted Ip Man as a amazing combat practitioner and teacher of the art.

Therefore, for all those of you looking for realistic self defense know that the system trained by rebels, created by Shaolin Monks that was passed down through family generations.  Due to its extreme capability in close range combat it is now required training for all stuarists and flight attendents for terrorist self defense on China Airlines is available for your training and personal protection

Ip Man has been credited as the greatest Kung Fu Master of the century by many famed magazines and top practitioners of our time.

You should make it a point to be trained at a place where there is a direct link to the Ip Man lineage, our center is just that place. Call today for more information on the Wing Chun Kung Fu system under the Great Grandmaster Ip Man 863.800.0171.

Self defense Florida – PART 1 NO non-sense