Structure is literally the foundation of any martial art, making it exponentially important to just about everything we do. It dictates the amount of power we can expend in our punches, what areas of the body become more vulnerable and open, and how easily we can throw in kicks. Most martial arts will include a variety of different stances yet will usually rely on one in particular as their fighting stance. Every possible fighting stance has its own advantages and disadvantages and complements the individual art. Though there are countless variations, the most prominent fighting stances fall into the categories of side and front stances. 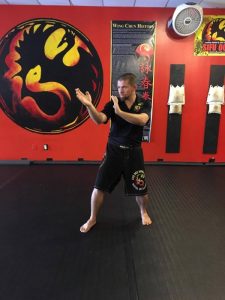 In this stance, the practitioner turns their body sideways so that they are essentially perpendicular to their opponent. Both feet are on one line with the majority of the weight shifted toward the back leg. Some of the martial arts that favor use of this stance are Karate, Tae Kwon Do, and Judo. Martial artists who use this stance do so for a few reasons. Primarily, they claim that there is less of a target area for the opponent to exploit when the body is sideways instead of full on. Another advantage is that this is an easier stance to kick from. Since most of the weight is already on the back leg, there is minimal prep work needed in order to pull off a kick.

Most of the time, you can do so without visibly shifting your weight, making it easier to conceal the kick until it has already made contact with the opponent. Some possible disadvantages to this stance exist as well. When a fighter employs this stance it will be easy to attack from the front hand and foot, but much more difficult to attack with the back limbs. Though it is certainly possible to attack with the back hand and foot, it will be highly telegraphed to the opponent due to the amount of distance the attack has to travel and the shift in body weight.

The front stance is a favorite of those in Wing Chun, Muay Thai, and Krav Maga. In this stance, the practitioner squares their hips and shoulders to face the opponent. Both feet point toward the opponent, one foot back, weight low and evenly distributed. This stance allows for greater structure than the side stance with a higher capability for impact. The ability to root is gained making you less likely to be pushed off balance. This stance also allows for all weapons to be closer to and facing the opponent. With the shoulders square, both arms have the opportunity to be equidistant to the opponent. This makes it easier to pull off combos and simultaneous hand techniques.

Avid side stance practitioners may claim that a front stance makes you more susceptible to body blows. This is due to having the whole torso facing the opponent; however, both arms and legs are free to help guard. Another possible disadvantage to the front stance is the groin being a more open target. In Wing Chun, they combat this issue by turning the front foot in slightly making it so that the leg can block the groin.

Though forcing all martial art fighting stances into these two categories may be a vast oversimplification. It actually shows how much we all have in common. In fact there are some martial arts that do not fit in these categories at all. As an example, BJJ and Aikido prefer a stance somewhere in the middle, neither a front nor side stance. But after you get past all of the different techniques and ways of doing things, at the root of it all is a solid stance and that is something we can all agree on.

Kung Fu is starting to pick up interest in the mainstream thanks to some very prominent practitioners. The popularity,...
Read More
Contact Info