Doing any martial art will include a good amount of cardiovascular exercise. In fact, one study showed that performing martial art kata’s and engaging in sparring increased heart rate to a higher level than that of running on a treadmill (Iide et al., 2008). This is mostly due to the fact that kata’s and sparring engage the upper body in more dynamic movements than running does. That’s not to say that running on a treadmill doesn’t add its own benefits to martial arts, because it does. The cardio performed while practicing martial arts is usually in short bursts, ranging from less than a minute to about three minutes on average. And while this (quasi-interval training) has its own benefits, the endurance gained from long distance running takes martial artists to the next level. It allows them to excel during prolonged testing periods and back-to-back sparring matches. 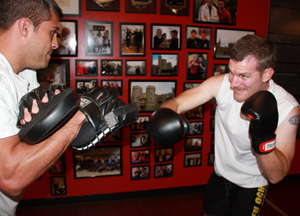 Martial arts instructors are particularly known for pushing student’s bodies to the limit in class. They want not only for you to build muscle, but also to have the ability to keep pushing even when your body wants to quit. Cardiovascular exercise after a workout can help remove some of the toxins built up in your bloodstream during that workout. Effectively reducing the muscle soreness sure to come in the days to follow (Clark, 2015). And for no other reason, if you do need to use your training in a real street scenario you have no idea hard long you will need to engage your enemy.

There have been countless studies done on the benefits of weightlifting, however, very few in regards to martial arts. One such study found that weightlifting has the ability to “increase punching and kicking speed, or power” (Iide et al., 2008). This same study suggests adding in twisting crunches to increase torque power behind the hip rotations so common in martial arts. Has an instructor ever told you to put more hip behind your strike? In addition, incorporating cleans and snatches could help in generating more explosive leg power for kicks and structure.

Strength Down to the Bone

But weightlifting goes beyond additional speed and power, affecting our bodies down to bone. Other studies show that lifting can improve bone density. “Not only can weigh training increase bone density, it can improve muscle mass, balance and connective tissue strength” (Seltzer, 2013). With all of these factors combined, the risk of injury in martial arts is greatly reduced. Think about all the times that you have been hit or thrown to the ground. Improved balance and connective tissue strength could make the difference between a fall and a serious injury.

Adding cardio and weightlifting will provide numerous benefits not only to your martial arts training, but also to your overall health. And if you are looking to combine cardio, weightlifting, and martial arts, consider making our kickboxing classes a part of your training regimen. Sifu Och personally explains some of our training in his article “Muscle Conditioning With Kung Fu”.

Kung Fu Wing Chun and Me