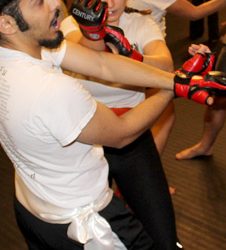 The ability to close the distance with an opponent is essential to any Wing Chun practitioner. You must be able to quickly respond to an opponents attack and shut them down to avoid follow up attacks. Different ranges call for different responses. That being said we will cover a few Wing Chun Entry Techniques here in this article. Before reading this article we suggesting checking out our previous article Wing Chun Vs Jab, Cross, Hook Takedown Combo. We explain the difference between committed and non-committed strikes which is essential to your training.

In our previous article Wing Chun Vs Jab, Cross, Hook Takedown Combo we touch on the idea of using the Paak to simply slip off the first punch. Connected is a video of Master Sifu demonstrating this technique. He explains how to utilize the Paak to deflect the initial blow and then glide off into a strike. A very effective and quick technique.

The Paak Punch is a very effective combo to use. Instead of trading blow for blow with an opponent, the Paak Punch allows you to strike and defend at the same time. When countering a cross or straight punch this is a definite must. You are able to either crush a punch and counter above it with a punch of your own. Or, you can slip the punch and strike the ribs. Either way you are able to immediately counter straight punches and close the distance.

Paak into Bui or Tan

If an opponent does not throw a committed strike it can be very difficult to throw a counter. In this case it would be prudent to defect the first punch with a Paak and then counter the second punch. Two great choices would be either a Tan Punch or Bui Sao Punch.

A Tan Punch would be a great choice against any sort of straight punch. Since the Paak would have simply deflected the first punch you can use this as a set up for the second punch counter.

If he throws a haymaker or wide hook the Bui Sao Punch would be the best choice. The curved shape of the Bui Sao would match the trajectory of the hook allowing for maximum protection.

If facing an opponent that moves a lot, pushing off the front foot, a Shadow Kick may be a option to consider. Our article Kung Fu Kicks goes into more detail about this kick. The idea is to crush into your opponents leg with a stomping motion. Typically aimed to blow out the knee the lead hand will typically drop as a result opening up an nice window for an attack.

Finally, the Crescent Kick. One of the most effective ways to use this kick is to the ribs when they extend their punch. This has the same shape as the Shadow Kick but instead of going down it strikes forward. You must thrust your entire body behind the kick. When this is done the head usually comes down as a result of the body caving into the kick. This allows for an easy strike to the head.

The Key to Closing the Gab

All of these techniques are futile if you do not close the distance with the right timing. You can only develop timing with hours of practice. Doing techniques in lines are a great way to build the structure for them and speed. However, if you do not consistently keep up your training your timing will be off an no amount of skill will help you if you do not time it correctly.