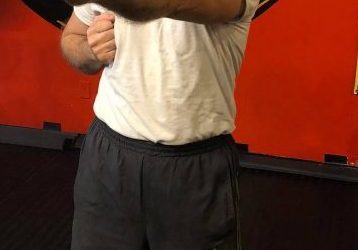 Sal Ficaro came to Sifu Och Wing Chun about one year ago. He tried one of our classes and got very frustrated with himself and decided to leave. Sifu Och was able to talk to him and arrange for private lessons instead to help him through those first steps of learning. When I took on Sal and his private lessons I knew this would be a difficult task. Sal was not used to Wing Chun and it’s movements. However, I knew that it could be done because Sal had the right mindset. In this article, Sal Ficaro: Ageless Training, Sal will tell a little bit about himself and his training here.

“Hello, my name Salvatore Ficarro I am 58 years old. I’ve been training at Sifu Och Wing Chun it’s been a learning process. Timothy Kittelstad is one of the trainers at this studio and he is absolutely wonderful. Even though the journey has been tough I absolutely love it. 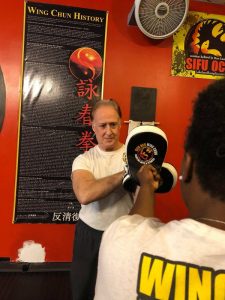 If anybody is in the 40s or 50s age and would like to learn some self-defense they should not hesitate. They should come down to Sifu Och and start their own journey! Your age shouldn’t hold you back. I’m 58 but that is just a number. I don’t allow that to be an excuse to not learn something new. Life can be very hard. And many times you want to just give up. But the wonderful things in life take some time to learn.

When you are working hard to learn something you may fall a little short. And when that happens, as long as you get back up and come back stronger that day was a success. There are days I feel I’m only at maybe 60% where I should be. But if I leave at 61% that means I am improving. Then next time maybe I’m at 70% or 80%. As long as you work hard and improve, no matter how small the improvement, you will always be able to grow. The staff at Sifu Och Wing Chun are the best trainers I’ve ever seen. They are their to help you. All they want is for you to be your best. And I want you to succeed. I feel if you give it a try your will fall in love with it.” 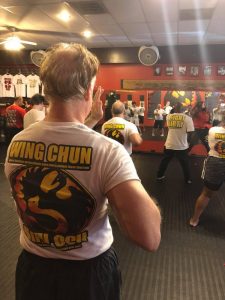 Sal shows that now matter your age you can accomplish anything with hard. Day after day Sal comes into class and puts in a hard days training. Starting from private lessons he has been able to work himself into the group classes. The most impressive thing about Sal is his determination. He doesn’t care about belts, or awards, or flashy techniques. He simply wants to know that he can take care of himself. Each day he comes in and builds himself from the last class.

Age is just a number. Everybody has hurdles they have to learn to overcome. Everyone has their own life story. Once you learn to accept your story and do the best you can with what you have you can start to really learn new things.

Instead of complaining about his age, or “not being able to move like he used to”, Sal trains his body to move the best it can right now. Because that’s what matters, the now. Not the past, not the future, but right now. What are you doing right now to make a difference in your life? If nothing than you should find the reason why. And then find a strong reason why you need to change that. Sal is a great example of someone who tackles life no matter what happens.