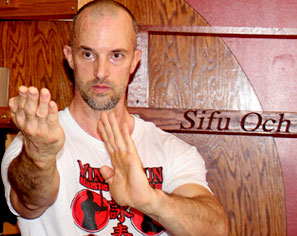 “My Journey Into Wing Chun: By Rich Dorsey,” is my story hope you enjoy!

I’ve wanted to train in the Wing Chun system specifically ever since I knew of it when I first got started in martial arts as early as my 18th year. My first teacher, a master of Isshin Ryu, was fascinated by it. Upon many of my homework assignments I received then I also was given information, literature and videos about Wing Chun.

Those few Karate teachings were basic. I had only begun to scratch the surface of how to use my hands and feet. They are minuscule to the depth I’ve seen at this early stage of Sifu Och’s system. Even still I feel many significant differences in the fighting styles. Not only are both of my ‘weapons’ straight-on utilizing more than half my body, but my hands (when I’m practicing my techniques properly) are continuously forward ready to be fired in short range fire attack. This being said I can honestly say I’ve never had any real training. Even though over the years I’ve tried many different styles of martial arts even boxing. 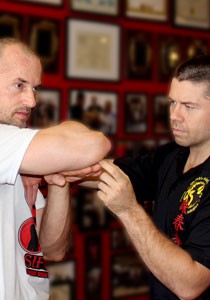 I’ve met many masters and many students but never anyone who has ever truly inspired me. I began to believe my dream of learning Wing Chun and meeting those kinds of individuals was out of reach. Not only did I find what I was looking for, I met one of the best fighters I’ve ever known. A teacher not only surpassing my expectations in knowledge but one who inspires me still. A system that not only challenges me but one that works. I’ve seen it work and have felt it work. To this day I don’t know if I’m more inspired by him or fellow students. Not only can I see what it’s done for myself but I see what it’s done for them. The changes in us all over the past two years.

And before I go on about the many benefits of Sifu Och’s Wing Chun system it’s important to me to remember who I was before I came. I’ve been athletic my entire life. I began calisthenics at the age of five, and weight training as early as eleven. As an adult, I became a personal trainer by trade. My confidence was exuded for all to see. Yet there was always something missing. All my goals in my physical attributes had for the most part been met. I wanted more than just to look like I could kick butt and take names. I wanted to feel it and believe it.

So I began refining myself, my cardio respiratory and training on my own to prepare myself for martial arts. Had I known then what I know now I would have just started immediately. When I felt like I was ready that’s when I found him. ‘When the student is ready the master will appear.’ I can honestly say I had no idea what true cardio was. And all the confidence -that I soon realized was only on the surface- was stripped away as soon as I realized how much I didn’t know. How much younger men (and some women) only half my size and strength could easily defeat me. Most only in the beginning phase of the system. The confidence that I have now runs deep.

The cardio I currently have I could have never imagined. I’m tougher than I ever could’ve imagined. These are only a few of the benefits I’ve gained and being only a short distance along the long road I’ve begun to travel I can only imagine how much more there is in store for me here. The excitement only grows the more I learn, understand, and experience…