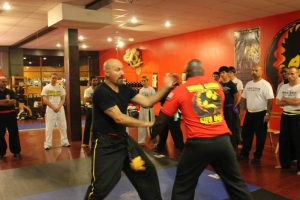 Both of these amazing fighters and teachers brought Bruce Lee up in the Wing Chun arts. At the beginning of his life he learned under Ip Man and then moved to America. As he developed his fighting prowess, he created Jeet Kune Do for his students. Then, as Bruce Lee’s movie career skyrocketed, he traveled to China once more-supposedly asking Wong Shun Leung to be in his movie The Game of Death. Wong Shun Leung said Wing Chun did not look good for movies as it was a fighting martial art. Though he declined, Wong Shun Leung would go on to teach Bruce Lee the remaining system of Wing Chun Kung Fu.

Until the very turn of the twentieth century, Wing Chun was almost unknown to the western world. Bruce Lee helped with this by letting others know of its power and combative fighting capabilities. At Sifu Och Wing Chun’s Lakeland Florida martial arts, Wing Chun Kung Fu is practiced, and training can reach the highest levels. The concepts of Jeet Kune Do that were instilled are as true today as they were when Bruce Lee was alive. Though many of the concepts of Wing Chun Kung Fu were lost from one instructor of Jeet Kune Do to the next, even without the complete understanding of the only system, Bruce Lee came back to Wing Chun Kung Fu…twice.