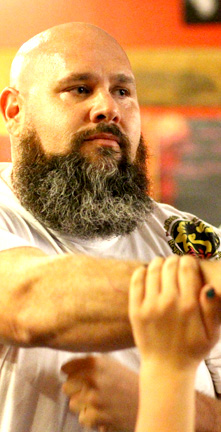 I have spent the last year training with Tampa Bay Wing Chun School run by Garret and I have noticed improvements in myself.  Garret emphasizes physical training at the beginning of each class.   I have improved muscle tone and stamina.  Wing Chun techniques taught to me have improved my reflexes much to my surprise.

I remember my first introduction to Wing Chun Kung Fu was an Ip Man movie three years ago.  I did not know much about it, but the movie inspired me to research it.  I liked the theory behind and thought it would be more practical for myself.  High flying kicks, although cool looking, are not my style.  When I finally had the opportunity to attend a class near my house I thought, this is great.

The instruction and encouragement I receive is outstanding.  Sihing Garret and Sifu Och inspire me to dedicate myself and continue training.

Not just in wrist against wrist but in everyday applications.  I react to things such as doors flying at my face, I caught one with a Jum Sau action.  The lady next to me said “Wow! That was like a ninja!”  I also catch the items knocked off shelves with a lot more ease.  The wrist against wrist drill has helped my sensitivity improve into reaction.  It has given me more confidence in handling myself.  I always knew my normal movements gave me power but now I am learning to channel that power more efficiently through stance and technique.  I am more confident that I’m more prepared for situations when I’m out on the town or at work.   I believe there are many applications I could have used previously in my life as a football player.  Namely the footwork and center line punch drill.  Both would have greatly helped me as an offensive lineman and coach.  It also adds to my overall scariness.

As the days grow closer to my son’s birth, I look forward to sharing Wing Chun with him.  I hope he will benefit from Wing Chun training developing skill, balance and confidence.  I see Wing Chun as an opportunity to develop father and son bonds.

I would also like to share a little bit of Wing Chun History with you, a southern Chinese martial art mentioned during the period of the Red Boat Opera in the Late 1800s.  Developed by southern Shaolin monks to help combat the Manchurians.  It is influenced by other Fujian martial arts that preferred short steps and close fighting, with arms placed close to the chest and elbows close to the flanks offering protection.  A simple boxing form quickly mastered by dedicated practitioners.  Two key figures keeping Wing Chun system alive after the burning of southern temples were Yat Chum Dai Si, 22nd generation Siu Lam Grandmaster monk, and Cheung Ng, also known as Tan Sao Ng within the opera.  It was taught to other rebels taking refuge with the opera.  From there it spread along the coast and rivers of south-eastern China by people who lived by and on the water.  The Shaolin nun myth was most likely created to protect the identities of the creators and perpetuators of the Wing Chun system.  Wing Chun translates to Spring Chant or Spring Praise.

More than bent knees and wide stances, Wing Chun stances and rooting provide the basis for the strength and...
Read More
Articles