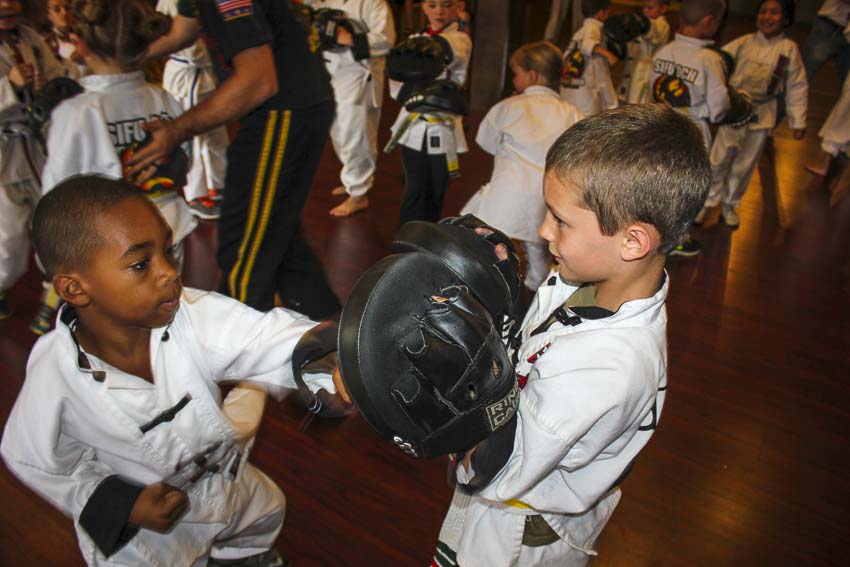 When teaching kids self defense classes in our Wing Chun after school martial arts program, a big part of that involves exercise. Exercising kids builds the muscles they need to use to be successful in self defense. Just as with adult Wing Chun classes, building muscles isn’t just for “the big guys”. Training kids is just as important for developing their self defense skill set.

Reasons for Exercising Kids in Training

After being at school all day long, we find that exercising our kids serves many purposes. Let’s examine just a few:

Working Out That Energy

The first thing exercising kids does is work out all that pent up energy from a day at school. While some schools continue to offer physical education, many do not. Of the ones that do, classes often involve low energy activities that don’t really allow them to expel energy. Kids need to move. They need to expel all that physical energy that accompanies their daily mental exercise. Without this exercise, kids tend to expend that energy in less productive ways. They can also work out their energy in scenarios where it’s not appropriate.

When exercising kids in our after school program, we give their bodies the means to get rid of energy built up during the day. It’s a release that helps their minds concentrate, and it prepares them for entering the next day’s activities.

When we’re training kids, we try to build up their muscles. We’re not going for weightlifters, but rather well-rounded training. We want kids whose arms and legs have some “experience” with being used in activities likely to engage those same muscles during self defense. We want to exercise kids so that when we drill them in kung fu those muscles get trained.

Preparing Them for More Rigorous Programs

We train our kids hard because this isn’t the end. We don’t want them to stop with kids after school programs. They should be ready to graduate into our adult classes. When they do, their muscles will really be tried. They’ll be pushed…hard! With the way we have our kids exercising, these rigorous training methods won’t seem entirely unexpected when they arrive.

There are probably even more reasons why we want our kids to train hard and exercise proficiently in our Wing Chun kung fu classes. The biggest reason, however, is that it’s fun. We actually like working them out, and we do so in ways that are fun and engaging. There’s no reason, at this age, that a good workout has to be boring. With a combination of fun games, and varied exercises, our kids Wing Chun self defense training builds muscles. It also builds confidence stamina, memory, and technique. We love it. They love it. What more could you want?