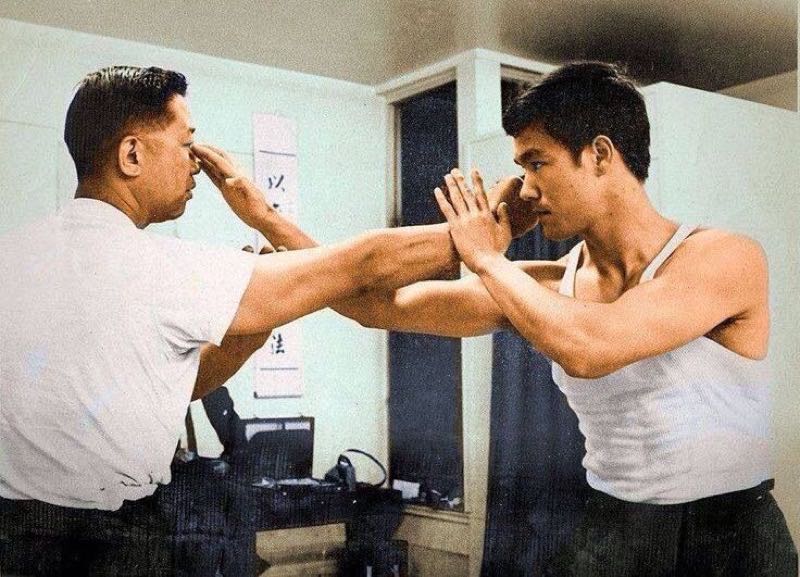 When it comes to fighting someone larger or stronger than yourself, you need to exploit every advantage possible. This is the key to surviving a street confrontation versus a sporting event. The mentality of “fighting dirty” could be the deciding factor on ones ability to survive an attack from a larger opponent, or potentially multiple opponents. One of the targets considered illegal in a sporting event is the eyes. On the street, however, it is one of the best targets to aim for. But how do you attack it? Wing Chun Biu Jee (Bil Jee), or “thrusting fingers” is a great tool for such a target.

The Biu Jee’s primary use is offensive, but it can be used defensively. Before addressing either of these let us address the structure of the Biu Jee or Bil Jee. Since Wing Chun’s focus is to protect the centerline while finding the most direct route to another’s, the Biu Jee is shaped in a way that when retracted, can easily protect the ribs of the user. The lead hand comes straight out from the shoulder, and the wrist is curved away from the body. This shape not only allows the eyes to be attacked, but it can also be used as a defense intercept of a jab or cross.

The second hand has two options: It can either be kept in a Wu Sau position, (hand in the center of the chest pressed outward, fingers pulled back) or a secondary Biu Jee. The secondary Biu Jee is kept chambered under the elbow of the primary hand. This secondary hand allows for a quick release of that hand. This serves two functions: It allows firing a follow up Biu Jee or clearing a hand pressing in on the elbow of the other arm. 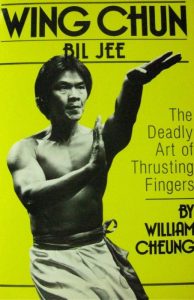 Moving on to the hand itself and how it is used, there are again two options. The hand, if striking towards the eyes, should actually be kept loose. If the fingers are stiff there is a likely chance of a break due to the eye being encased in bone. There is an exception to this: The fingers can and should be stiff if using the same technique when striking the throat. With a fast whipping motion, the fingers are thrust forward into the eye of the opponent simulating the striking of a snake.

If the eye is missed, the finger will simply collapse against the pressure only causing minor discomfort versus a break. The attacker may not have been dealt any serious damage but with a strike going towards the eyes he is almost sure to close his eyes or at least pull his head away. This is the perfect moment to follow up with another attack.

When you combine the elbow structure and the hand shape, you now have a tool that has multiple uses. As mentioned earlier, it can be used to intercept strikes from the outside. It’s also quite useful from the inside against hooks. Since the elbow is kept below the hand, similar to the shape of a Tan Sau, it can be thrust towards the bicep crease of an arm to be used defensively. The same concept applies (as mentioned earlier) against a jab or a cross.

In application, the Biu Jee can be used in quick succession against a quick Jab and cross combo. First, you can intercept the Jab from the outside. Then, depending on the situation, you can slip the cross on the inside and take the center. You can also redirect the cross off, and take the opposite side. With the opponent committed in their cross, their structure can now be compromised with that outside angle.

On the street, you have to do what you can to survive. If that means jabbing someone in the eyes to get home safely, do it. The Biu Jee is a great tool. Offensively and defensively, it can be fired quickly and easily against very common attacks or for a direct line to disrupt and seriously damage your opponent. Effective and direct, it is a tool everyone should have in their street arsenal.