Sparring is an essential part of most martial arts. But when it comes to gear, each school decides how much and of what type to wear. While some schools require the use of sparring gear in all combat situations, others are a lot more lenient. They might only require it for designated matches and competitions and in some cases, not at all. Some people argue that sparring gear doesn’t actually keep us safer, but can even increase our chances of getting hurt. Others don’t want to wear it because it can be bulky and cumbersome. So where do we draw the line?

If competition is your goal, then the answer is because they require it. The North American Sport Karate Association (NASKA) rules require head gear, hand and footpads, mouthpiece, and groin cups for all adult competitors. For competitors under seventeen, they also require chest and face guards. If you are training to be a professional competitor, or are at least serious about competing, your training should always include the gear that you will wear on competition day. If you practice with less gear, or none at all, competition day will feel awkward and slow. In fact, many competitors practice with weighted gear so that when they go back to wearing regular gear they feel lighter and are able to hit faster.

If your goal is to simply stay safe while training, you may need to take a different approach. Depending on what martial art you practice, different gear may be more beneficial than others. For instance, some martial arts frequently incorporate the use of elbows and knees. In these arts you may want to consider adding elbow and knee pads, especially if they are actually making contact. Other arts that heavily rely on kicks to the body may need a chest guard. Or if your art includes more eye and facial strikes, a face guard might be in order.

There is an argument going around that head gear increases your risk of brain trauma over not wearing gear at all. This argument comes from personal opinion though it does rely on facts. Perpetuators of this idea claim that the added inch or two of padding make your head a bigger target, and more likely to get hit. It may also lure fighters into believing that they won’t get hurt, making them less defensive of their head. They also claim that head gear impedes your peripheral vision, further increasing your odds of getting hit. While they have not yet tested this phenomenon, they have tested how effective head gear is at reducing the impact to your brain. Wearing head gear can reduce the trauma to your brain by about 50% (McIntosh & Patton, 2015). While 50% is eons better than zero, it is still a relatively low number. Thankfully this statistic is pushing manufacturers to invest research into creating a more effective head gear. Something that we will hopefully see in the near future. 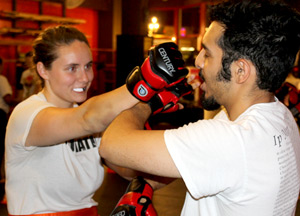 So what gear will you wear? Personally, as someone who sustained a concussion while not wearing head gear, the choice is easy. I would wear anything with the potential to reduce brain trauma, no matter how annoying or obtrusive it may be. Protecting your brain is not something that should be taken lightly. But for others without the same experience, maybe going without seems like the better option. Whatever choice you make, make sure to make it from the point of sound research and not momentary comfort.