The average parent will have many concerns when contemplating enrolling their child in a martial arts class. The top three questions I have encountered talking with parents about their learning a martial art are: Will my child be safe? Will they use techniques on their siblings or bully others? And at the root of it all, will these classes make my child violent? The last one is especially a concern among parents of children who are already showing violent tendencies, leaving parents wondering “will martial arts help or only make it worse?” In this article I will address the question: “Does Martial Arts Make Kids Violent?”

Will my child be safe?

In observing any martial arts class, once can generally expect to see aggressive and violent techniques. So why then would that be safe for a child? For starters, these techniques are usually performed on punching bags, target mitts, or in the air without an opponent. Before the child is even allowed to hit a punching bag, we teach the proper technique. The goal is to avoid any injury to their wrist in the execution. When the child moves on to working with partners when drilling techniques, punches are always pulled and they are not allowed to hit the face – as a general rule that many adults follow as well.

When it comes to one-on-one sparring, many schools don’t even allow their students to spar until the student achieves a certain rank and the instructor is confident in their ability to follow instructions. At this point, we require all students to wear gear that will usually cover the head, hands, and feet, with some styles including a chest guard, shin guards, elbow pads, and a mouth guard. Even with all of this padding, students are often instructed to keep contact light, with good technique praised over power.

Will my child use techniques against their siblings or bully others? 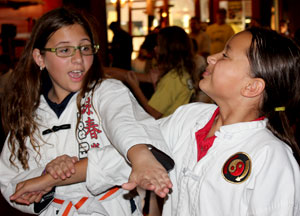 The child’s first instinct in a fight should never be to egg on and encourage the fight, but to deescalate. One of the first things that I learned was to put my hands up. This was a non-threatening semi guard combined with a verbal exclamation “I don’t want any trouble”. Your hands are up simply as a precaution. It needs to be explicitly taught to the child that fighting is always a last resort. To use only if there is a threat to the safety of themselves or another individual. We never fight over possessions. Children should learn that if they are being physically threatened over money, especially with a gun or knife, to give them the money.

So will learning martial arts techniques ultimately encourage violent tendencies? To be honest, the answer to this question greatly depends on the martial arts school and the instructor. A good school will explain the situations in which to use their techniques. This helps to will cultivate a non-aggressive mentality in their students. When done right, children that do martial arts will actually have less violent tendencies than their peers. They will have a greater understanding of when, where, and how to use their defensive techniques.

Cuts, Collisions, Crying: Tips for Your Kids Program, will explain some ways to help your young ones when they...
Read More
Articles