Wing Chun teaches only two weapons formally. The Long Pole and the Butterfly swords, both showcased in the Ip Man Series of movies, are powerful weapons that have very interesting pasts. While they are both very effective, neither of them were design originally to kill. This is due to their Shaolin roots. We will present the history of both the Long Pole and Butterfly Swords to better understand them.

Shaolin and the bo staff

The Shaolin staff, also called Bo staff or Dragon staff, dates back to China’s early Sung Dynasty (960-1279). Favored among Shaolin monks it served as weapon and multi-purpose tool. They used the staff not only for self defense but also for extending reach, moving objects, walking stick on travels. Bound by their philosophy of understanding and helping people, monks used the Bo staff to defeat the opponent without inflicting fatal injury.

The use of the Bo staff continued well into the Qing Dynasty (1644-1922) eventually becoming a military training routine taught by adept monks. Among the weapon experts was one monk by the name of Ji Sin (Gee Sin), a shaolin monk of the Sil Lum Temple. One of the Five Legendary Elders of Sil Lum, Ji Sin was an expert in various martial arts styles including the Dragon staffs Luk Dim Boom Gwan form. In 1723, political differences resulted in destruction of the temple and its residents by order of the Qing government; fortunately, Ji Sin was able to escape. Coincidentally Ng Mui, another Buddhist monk, also escaped. She later passed on her knowledge of martial arts to Yim Wing Chun: the source of Wing Chun’s, the martial art’s, name.

To avoid the government, Ji Sin laid low as a cook aboard the Red Junk1. Among the members of the Red Junk was the pole man, Leung Yee Tai. Already accustomed to working with the long pole Leung Ye Tai became interested in learning martial arts from Ji Sin. He then taught Leung Yee Tai the form of the Luk Dim Boom Gwan.

Later, Leung Yee Tai met and befriended Wong Wah Bo, an opera performer and also a master in Wing Chun. The two then became both student and master to one another, teaching the knowledge of their martial arts and learning the others martial arts. Through their mutual sharing they discovered that parts of the Wing Chun system perfected the form and technique of the Luk Dim Boom Gwan. After this discovery the two officially incorporated the Luk Dim Boom Gwan into the system of Wing Chun as one of its two weapon forms. 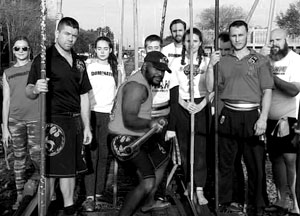 How the Baat Cham Dao came to Wing Chun

The history of the butterfly swords incorporation into Wing Chun is not as clear as the Dragon staff and its form: Luk Dim Boom Gwan. The earliest historic reference of the butterfly swords date back to the 1820’s, but this is debated. Shaolin monks highly valued the butterfly sword for its means of training and defense. Their Buddhist philosophy heavily influenced the dual swords design. Strictly prohibited from taking a life, the monks used the swords to disarm, parry, and cut opponents, incapacitating them. Aside from the first 3 inches of the blade, the blade was dull on both sides and for several reasons: first, it strengthened their caution of killing the opponent; second, the dull blade added extra support to the swords structure; third, a heavier weapon could easily damage a sharpened edge .

According to history, the Fut Pai Hung Mun (Buddhist Hung Mun), a secret society that operated within the Southern Shaolin Temple, created the Kung Fu double butterfly knives. The sole purpose of the society was to oppose the Ching Dynasty and restore the Ming Family to the throne. Cheung Ng (Tan Sao Ng), a member of the society, was a highly educated man with much knowledge in both military and literary skills. He also a master of the butterfly swords and the art that was to become Wing Chun.

Unfortunately, Cheung Ng was forced to flee to Guangdong Province after the Southern temple fell to the Qing forces but continued the society’s goal. It is said that Cheung Ng then remodified the butterfly swords taking away its non-lethal characteristics and creating a more practical battlefield weapon. Trimming the front of the blade giving a curvature and sharpened point, giving off the appearance of a large dagger, accommodated stabbing and thrusting motions. After a while the swords form continued to evolve. 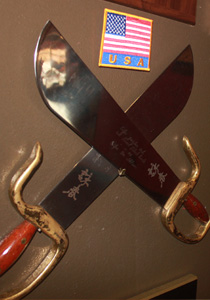 Swords took their modern form during the 19th century. The Butterfly swords are no exception as they took on their current form during this time. As previously mentioned the butterfly swords and form, Baat Cham Dao, and their incorporation to Wing Chun is unclear. Regardless, the swords are seen as a valuable part is the Wing Chun system increasing one power, strength and flexibility.

1Junk – ancient Chinese sailing ship. Used as early as the 2nd century AD then showed a rapid increase during the Sung Dynasty, and evolved through later dynasties. Regularly found throughout South-East Asia and India. Sailors believed they could persuaded dragons in the clouds to help them instead of harming them if they sailed with bright colors. They also believed that red was the best color for this.