My First Year of Wing Chun: How I Earned My Orange Sash

As I reflect on my first year of Wing Chun, I’d like to start out by giving a sincere “thank you” to all of those who have trained with me, sparred with me, coached me, and inspired me along the way thus far. I would not be where I am today without all of you, and wanted to share my gratitude first and foremost before sharing the rest of my story of how I’ve grown as a martial artist and human being since I joined in March of last year.

My Journey to Wing Chun 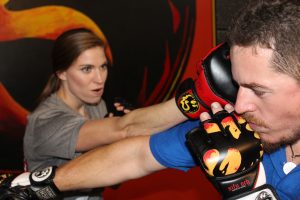 Growing up, I was a competitive gymnast, my mom was a professional water skier, and my dad regularly practiced Judo, a Japanese martial art. I watched him work persistently to get his black belt, while also coaching young students who admired him. He taught me how to kick and punch the heavy bag in our backyard when I was 2 years old, so I always had an interest in pursuing martial arts, but I did so many other competitive sports as a teenager instead. I was a born and bred athlete, and martial arts was in my blood. It was only a matter of time before I would find a passion for the sport because my dad lit the flame that burns within me today. 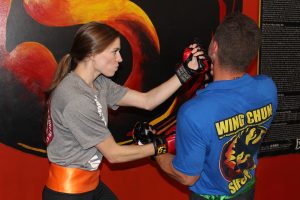 Finally, after doing much research over the years on different styles of martial arts and weapons training that always intrigued me, I narrowed down my top 3 choices with Wing Chun being the first. I thought it was going to be a struggle to find a decent school in an area that wasn’t known for being one of the most urban cities in the state, but lo and behold, my Google search brought up a few Wing Chun studios in Lakeland, so I dug a little deeper to find the best one. 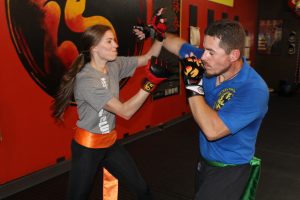 I was looking for a place that would feel like home with close friends that would become like family. I was looking for a place that was professional, would provide me with the best training, the best instruction, and that specializes in what they do. It was clear from the online presence of Sifu Och Wing Chun that I was already going in the right direction, so I called for some more information and before I knew it, I was scheduled to try it out. The best part? My dad was coming with me! We were excited, and the classes didn’t disappoint. The effectiveness and real-world application that they teach is unlike anything else. That’s why I chose Wing Chun. With enough proper training and dedication, I knew that a twiggy, little girl like me would be able to learn to take down a bigger, stronger opponent quickly and completely. I’m not at that point yet, but I’m more prepared for an attack on the street today than I was a year ago. And each day that I train, I’m that much more prepared to defend myself if necessary.

I didn’t choose Wing Chun because it’s easy. It’s not. I didn’t choose Wing Chun because it looks cool. Most of the time, it doesn’t. To an untrained eye, it happens so fast that the bad guy is on the ground before he knows how he even got there. The reason I chose Wing Chun was not just for good friends and dangerously effective self-defense, but I chose it because I wanted to challenge myself to be disciplined doing something hard that I’ve always wanted to be great at.

It has definitely been challenging, but I’m still doing it and love it! 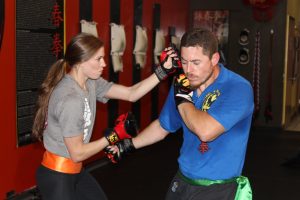 It’s been a little more than a year since I started, and I realize that learning Wing Chun has been so much more for me than learning how to defend and discipline myself; it has been more for me than learning the techniques and how to apply them. I face and overcome challenges every day that make me a better martial artist and a better person, and it’s the biggest challenges that I’ve learned the most from. They’re the ones that I wasn’t expecting to have, and also the ones that are a true test of character. I have learned to fall in love with the process of doing a technique thousands of times to eventually see it come as a reaction in a sparring session; I have learned (and am still learning) patience with my own training and patience with the training of other students; and I have learned the importance of, not only surrounding myself with people that support and uplift me, but proactively supporting and uplifting everyone else as well. 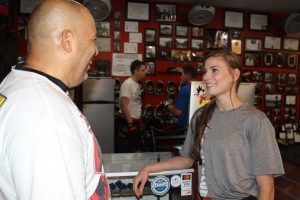 I’m not perfect, nor will I ever be, so… I decided when I first started, that my Wing Chun Kung Fu journey does not have a destination. I learn, grow, change and become better at facing these challenges every day because that’s the journey I chose to take when I walked through the doors of Sifu Och Wing Chun. It’s been a year, and so far, this journey is just beginning. I don’t know where else it will take me or who will join me along the way, but I’m excited to keep learning, keep growing, and keep training!

Hope to see you in class, I look forward to being your training partner!