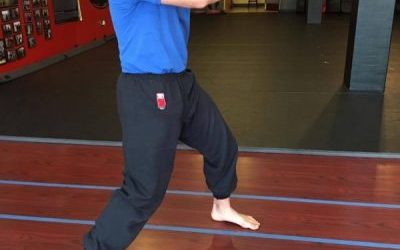 You can have the fastest hands in the world, but if you aren’t at the right place at the right time that won’t matter. Foot work is literally the foundation to any style. You may be able to block or evade an attack here and there with good hands or head movement. However, if you do not base your counter with fighting footwork, it will be difficult to execute.

Superior angles will make your life much easier. It is much simpler to deal with an opponent when you have minimized their ability to use multiple “weapons” at once. In the same way, striking your opponents key points will also be easier when you are positioned correctly. Wing Chun seeks to dominate the outside angle allowing maximum trapping and striking to occur.

There is a big debate among Wing Chun practitioners. Not only about weight distribution through the feet but also between the legs. First let’s address weight through the feet.

When a weight lifter squats his weight must drive from the middle portion of his foot to his heels. With proper skeletal alignment his structure is locked in place and only the strongest muscles are recruited to move the weight. If alignment is broken serious injury can occur. When finished correctly the weight will be completely on the heels as seen here. 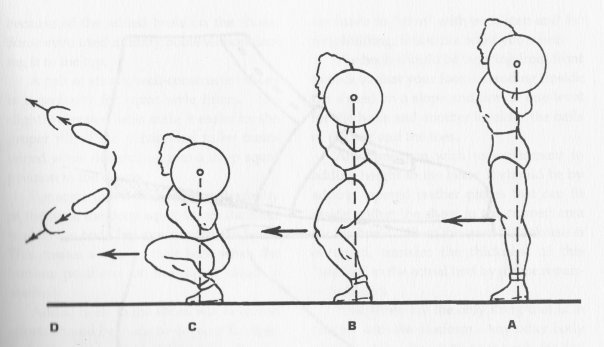 Just as the weight lifting supports his weight with structure, the Wing Chun Fighter supports his power through his alignment. Following the same rules through physiques the weight is on the heel when engaged. This allows strikes at full power to be stopped and maximum strength can be delivered through blows.

Even though the heels are the source of power and structure, speed is seriously inhibited when the weight is focused there. Weight should only be distributed to the toes when looking to utilize speed. Speed is used to gain the correct position. This is typically done before contact is even made. Once connected to your opponent weight should immediately be transferred to the heels to again for power. Closing the distance with an opponent is essential to the Wing Chun Fighter. If he is unable to get to the trapping range it will be difficult to execute proper techniques.

The final aspect of weight distribution to cover is the amount of weight on each foot.  At Sifu Och Wing Chun we typically keep our weight 50-50. The reason behind this is to keep our ability to defend against takedowns. If the weight is distributed to far to one leg you can become susceptible to those types of attacks. Sweeps and single leg takedowns are difficult to stop without even distribution of weight.

To give a specific example, we will look at a single leg takedown defense. First, hand positions: jum to the neck, gan to the arm. (Essentially a Gan Da). This will then become a tan and a fook. The Jum to the neck stops the person from getting to your core. The gan to the arm is used to block them from getting your leg. As a result you gain an underhook. (illustrated below). 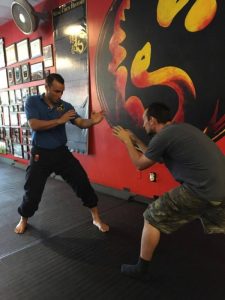 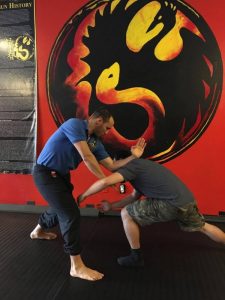 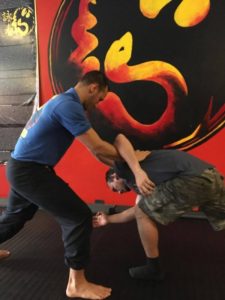 In unison the foot that is being attacked must be retracted. The foot must be swept back to avoid getting caught. This all occurs within a split second. If the weight split 70-30, or 60-40, it will be very hard to adjust and defend this type of attack.

There are many different opinions and reasons about weight distribution. At Sifu Och Wing Chun we keep it mostly 50-50 to maintain the ability to adjust in any direction as quickly as possible. We are then able to shift and adapt to any attack that is thrown our way.