I first met Sifu Justin Och almost two years ago. I came into Wing Chun classes with a swarm of new people. Immediately, a swarm of colored shirts and sashes overloaded my senses. The first few months simply delivered a shocking mix of strange movements and the excitement of starting a new martial art. With no previous exposure to martial arts, I amazed myself using simple techniques to block punches. Punches that would not have truly made impact. Moving forward almost two years, I received my green sash and blue shirt. The most important roadblock that I had to overcome involved developing the student mindset behind learning Wing Chun. Without this student mindset, no student will never be successful. Anyone can practice sloppy techniques, but until you develop the student mindset, your martial arts training will never reach the depths of appreciation and effectiveness it deserves.

After attending the school for just two years, I’ve seen hundreds of people walk through the doors and never come back. This usually occurs within the first 6-12 months. They come, participate, and walk away thinking they have studied Wing Chun. The truth, however, is that they have simply been exposed to Wing Chun. Far too many people make the mistake of associating exposure to Wing Chun with actually training in Wing Chun. The crucial difference lies in the mindset of the student. When a person has developed this correct mindset, they truly begin to train.

For the first time ever, after developing this mindset, the student will push their hardest.

What is the Student Mindset?

This student mindset goes above simply just reproducing various techniques across various lines done in class. This mindset is about making every single thing you do in class matter. How you train, is how your Wing Chun becomes programmed into your reactions. When you step into class, you are surrounded by an incredible wealth of knowledge and skill. The only thing that can keep you from becoming your best is yourself. Very few people come into this school with the right mindset, but everyone can develop it. The choice is yours. I believe this mindset develops into 4 things: Sweat, Perfection, Blood, and Tears.

You can’t succeed if you don’t push yourself. These techniques will not mean anything if you just throw them out there and hope for the best. No techniques ever will. When I began developing through the very beginning ranks, I noticed that the upper sashes always seemed to be dripping in sweat. The rest of us were barely out of breath though, we complained about our arms being sore. I then realized that this was even the case when they were doing the exact same thing we were doing. I soon realized that this difference was due to how they trained. The more advanced the student, the harder they trained. This doesn’t necessarily mean that they could punch harder, but rather, they would give it everything they had.

A line that a lower student would do looks lazy in comparison. After a few lines, the upper sash would be breaking out in sweat. This doesn’t at all relate to their endurance, but specifically relates to how they are training. This same exact illustration can apply to workouts. When assigned to give 500 chain punches into the focus mitts, the easy method rushes through without giving much focus behind the strikes. You probably won’t even break a sweat. But what if, instead of just faking your way through the 500 attacks, you made every single one of those punches as hard and fast as you could? By the end of it, you’d be dripping in sweat. How much more did you gain from those same 500 punches? If you’re not sweating, you can be sure you’re not working your hardest.

There becomes a crucial difference between giving a technique everything you got while still doing the technique, and just hitting as hard as you can. When you are drilling techniques, your focus should first be on perfection. If you train a particular block 100 different times, but 50 of them are sloppy, then when you draw from that “reflex pool” you have a 50% chance of successfully completing that technique. In other words, you have a 50% chance of getting hit by a knockout punch. Those are not the odds you want to be training. When you first learn a combo for example, of course you aren’t going to remember everything. You’re going to have to think about what comes next. So it is important to slow it down for perfection.

Don’t ever excuse a repetitive mistake. If it’s sloppy, if it feels rushed, or if something seems off, fix it. If you don’t know how, ask. There is a wealth of information around you, so use it. Don’t allow yourself to train imperfection. You have to learn how to balance power with perfection. If you go too hard or fast and lose the precision of perfection, you’ve failed to perform the technique. You can perfectly perform and land a technique but fail to make it have damaging power. That means you’re just tapping your opponent. Neither of these does you any good.

You have to accept the fact that you’re going to be hit. You’re going to bruise. If you can’t perform your techniques against resistance, then they’re not where they need to be. If you can use it against someone punching you, how can you defend yourself? It should also be noted that you are learning a new martial art: including your own body. This goes above just reproducing a technique. You have to condition your body for this art. It won’t necessarily be the greatest feeling in the world, but if your arms can’t hold up to training, they won’t when you need to defend yourself. Of course, this doesn’t mean that this school is a brutal death cage like gladiator school.

The same thing goes with working out. You are going to get sore lifting weights; you might accidentally drop weights on your feet; you will be exhausted; or you could pull muscles. If you’re too afraid of being hit, or you want to train without being hit, then you’re not training an art to defend yourself. You’re going to get hit. It’s how you learn to protect against that hit the next time. I get hit every day, usually multiple times, but it doesn’t bloody up my face or break my bones. If you’re not training against true resistance, you will never know if what you’re doing actually works. Here, I know what works. I know what I’m training works because I can prove it.

You’re not as good as you think you are. You’re going to struggle with some things. You’re going to feel like quitting. You’re going to want to stay home and relax instead of coming to class. You’re not alone in any of these feelings. Every single person above you has felt this way multiple times. The question is whether you are going to push through it or not. It comes down to you. It’s not going to be easy, but you can certainly do it. Just keep pushing. Never give up.

I wasted the first year of Wing Chun training without this student mindset and regret it. When I truly started to develop this mindset, my training exploded. I never felt as close to my Wing Chun family as I have now. I crave each day for the information I get. I am able to better accept my shortcomings because they will help me to be better. Tests are no longer something that I worry about, because I have trained it hard from day one of each rotation. Test days are incredibly fun. Train, and train it with everything you got. Push yourself, and encourage others to push. It’s going to be hard, but it is so worth it.

You will gain so much by training the right mindset. Don’t be afraid to fail because you’re going to. The only difference between a master and you is that they’ve trained it in the right mindset and failed more times than you have even attempted. 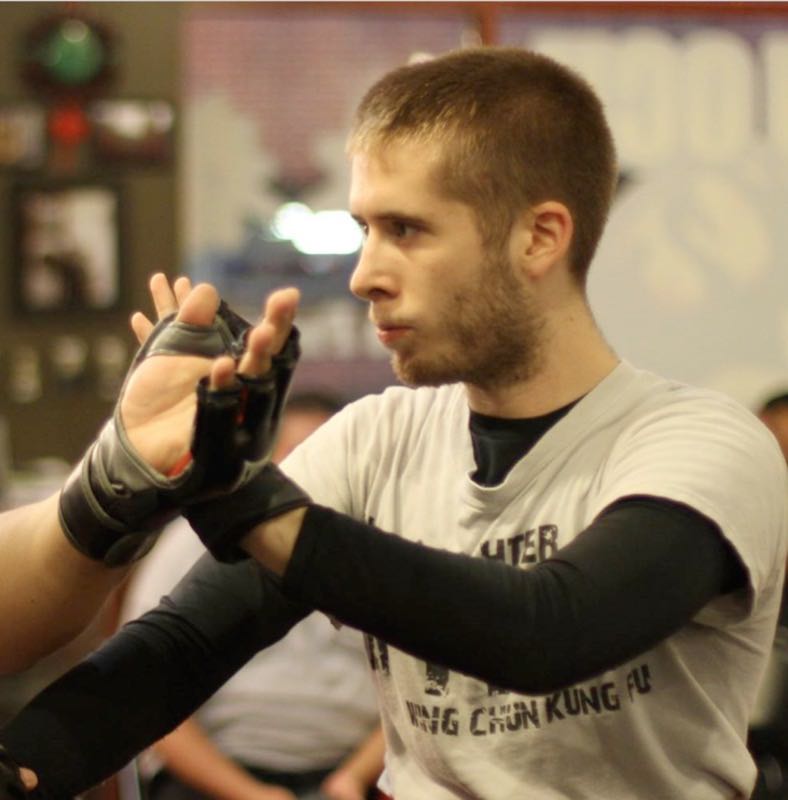 Follow me
Andrew Corbett
Having started his training in July 2014 after his first year at Southeastern University, Andrew loves more than just studying music business and computer programming. His time at Sifu Och Wing Chun has transformed him, and he cannot wait to see what future training will reap.

Follow me
Latest posts by Andrew Corbett (see all)