In this Article: “A Letter To Myself-Marcus Morales”, Marcus tells us his story of how he started his Wing Chun Training. We hope you enjoy this little story!

Do you know the feeling you get when you are about to do something and you do not know what the outcome is going to be? It happens all the time. For example, imagine it is the middle of summer, you are at the local pool cooling off along with a bunch of other people, and suddenly you decide you want to dive off the platform and continue to develop your patented cannonball dive. There you go, walking past everyone and you climb to the first level.

But, You realize that there are steps that will take you to the second tier and you follow them up another level.Then you see there is yet another set up steps and they take you to the very top platform. Somehow, you have managed to get up there, where no one else dares to go. There you are, standing at the highest level at the public pool with your lucky red bathing trunks. The ones with yellow rubber duckies on them. You look down and see that you are on the edge, staring at the crystalline blue water, deciding whether or not to jump.

That is exactly how I felt when I was standing outside the door of Sifu Justin Och’s Martial Arts school. I was standing there, watching everyone doing all kinds of crazy things. Trying to decide whether to step inside or just keep walking. I must confess that I only knew a little about Wing Chun. I consider myself to be a bit of a tough guy; grew up in some tough neighbor hoods. I also served my country for six years and finished my obligation with an honorable discharge. During that time I even came back from a major injury in the Army. Suffice it to say, I thought I was tough enough. But something kept urging me to step inside, so I did. 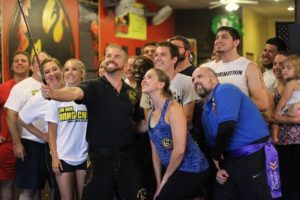 Once inside, I was intimidated by all the people there, knocking each other around. I stood there, at that ceramic tile square at the entrance to the school. And the, Sifu came along and welcomed me in. He was not what I expected. Truth is…I didn’t know what to expect. But he walked up to me, with a thousand-watt smile on his face, and made me feel right at home. I didn’t know this until later, but he had just finished wrestling on the floor with some of his students.

One more thing I did not expect. I was still a little defensive, mostly because I didn’t know much about how things worked. All Sifu did was invite me to join in on the class he was conducting and then he would get back to me to see whether I wanted to be a part of it, so I accepted the invitation. I have not left the school since.

Learning How to Swim

From the very First minute you become a part of the school’s family and its culture. I was automatically being grabbed and tossed. I even received a stiff punch to the face, and just like that I was absolutely drawn to the scene. Somehow, despite all the punches and tosses, the sore bones and sprains, I have become more and more involved in the art. Sifu is there, with a smile on his face, teaching you everything you need to know about the art. And this is not a man who is boastful or driven by a sense of superiority. No… this man truly loves to tach, he wholeheartedly love the art, and he absolutely enjoys his students.

One other thing that Sifu Och strives for at his school is the development of a community within the school. He is constantly coming up with events for the school, activities designed to strengthen the camaraderie within the student, to help foster positive relationships between the students, ones that they can potentially carry along wit them throughout their lives. I have come to believe that his desire to develop and nurture these positive relationships is at the core of the most successful martial arts school. Creating bonds not only between student and teacher, but between students, strengthens the school itself. 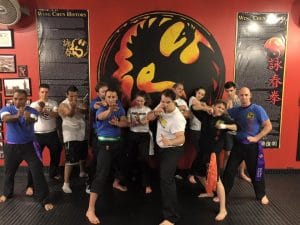 The students at the school are without a doubt the greatest assets Sifu has at his disposal. From the Green Sashes all the way to his instructor level students. They understand Sifu’s philosophy when it comes to helping everyone who start training. They