Chinese New Year in Tampa is a proud home to the asian community that loves the culture, traditions and cultures with a grand passio.  Asain culture rich with celebration are inspirationally festive during the Lunar Moon and Chinese New Year. 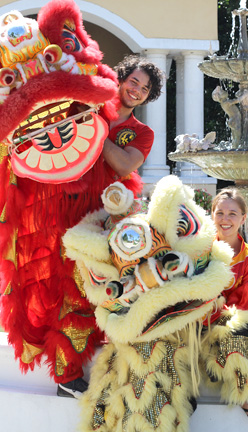 This year Sifu Och Wing Chun Kung Fu celebrates the Year of the Rooster with Florida Chinese Lion Dance performance, live chinese drums, symbols and gongs as well as kung fu demonstrations and prizes!  With hands-on activities for the whole family and traditional chinese lion dance performers we will ring in the New Year with great luck and fortune.

During the New Lunar Moon and Chinese New Year their is always food, singers and celebrations.

Held Every Year at the end of January to the first week in February the Chinese New Year in Tampa provided by Sifu Och Wing Chun provides the city with a real feel of the authentic celebrations and Asian traditions of the Holiday.

Chinese New Year is also known as Spring Festival and is an important, some in the Asian community say the most important celebration of the year.

From Lantern Festivals to the new moon, the first day of the Chinese New Year in Tampa falls between the January 21st and February the 20th.  Centuries old the festival was a time not only to honor deities as well as ancestors it is celebrated in countires all over Asia.  From The Philippines, Vietnam, Thailand, Cambodia, Mauritius, Asutralia, Malaysia, Indonesia, Singapore, Taiwan, Hong Kong, and Macau.

This is also a time for families to clean house, wisk away bad forture and make the new year a new you.  Activities include lighting firecrackers and Red envelopes are distributed with paper money in them into the florida chinese lion dance mouth for good fortune, wealth, and happiness.  Book our traditional cultural performances with the Chinese Lion dances. — Sifu Och Wing Chun the Year of the Rooster!