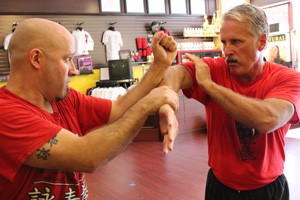 Advanced Chi Sao or “Sticky Hands” drilling increases a Wing Chun fighter’s ability to respond to an opponent’s changes, adaptations, and varying attacks during a fight. Chi Sao (or Chi Sau) trains you in the development of automatic reflex responses through sensitive contact training with the forearms, legs, and body. The amazing part about Chi Sao drilling is that it allows both partners to train and practice at the same time. Our Advanced Wing Chun classes incorporate Chi Sao drilling and allow both practitioners to sense changes, react to each others offense or defense in a split second, feel body movement & pressure, and react accordingly. It’s a way to practice immediate execution of techniques and changes in order to control the momentary chaos of combat.

The Purpose of Advanced Chi Sao

Chi Sao and its techniques are very specific to Wing Chun. Wing Chun uses both hands for simultaneous offense and defense while keeping the entire body actively in the fight. Wing Chun is always “feeling” for a way to end the fight instantly while both partners are actively redirecting, counter-attacking, and feeling for openings. This makes Wing Chun unique in the world of traditional and modern kung fu. Wing Chun is one of the only martial arts that trains all these aspects—combining both single hand, double hands, blind fold, and leg fighting into one continuous fighting/advanced sensitivity drill. Advanced Chi Sao training and drilling is a big part of this and a big part of our advanced Wing Chun classes. 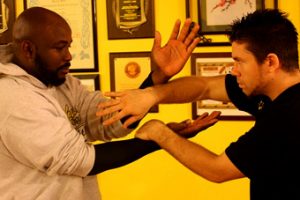 In all the styles of Kung Fu that exist today, I don’t know of a single martial art that has all of the aspects that Wing Chun Chi Sao training incorporates. All Chinese martial arts train some varying amount of “soft to hard” (relaxation to strength), but what makes Wing Chun so incredibly unique is that it combines all of these techniques with the purity of the fighting mindset. Each of theses other Chinese martial arts practices its own form of sensitivity training. Tai Chi has its push hands. Northern Kung Fu and Southern Kung Fu use arm and leg drills that strike, press, and push in order to test their partner’s rooting, foundation, and reaction times. Wing Chun Kung Fu was one of the last martial arts to be developed by the Shaolin Temple. It was created during the 17th century during the use of weapons, guns, and knives—and during a time of war. The Shaolin Monks and Nun (Ng Mui) developed Wing Chun by combining the best (and fastest) aspects of all the traditional Shaolin Kung Fu styles. This new art (Wing Chun) was created in order to learn it in a quarter to half the time of traditional styles—styles which took 15-20 years of non-stop 14-18 hour days of training. Wing Chun’s unique approach and training of all of these different ways develops a practitioner that can attack and counter an opponent’s movements and reactions quickly, precisely, and effectively. Even with a strong mind and body, a Wing Chun fighter needs to train proper Chi Sao. Chi Sao is known as one of the major “engines” of Wing Chun Kung Fu and its fighting reaction.

Advanced Chi Sao drilling develops your contact sensitivity, rooting, and foundation. It also hones your use of energy, reaction time, hand combinations, and reflexes. It also drills and improves your positioning, angles, and trapping abilities. All of these aspects are critical when intelligent free fighting. Advanced Wing Chun classes include Chi Sao rolling hands to train a practitioner to not exchange blow for blow or kick for kick but rather exact a specific trained response in a natural, effective, and fluid manner that controls, dissipates, and redirects the opponent’s force. Chi Sao allows a Wing Chun practitioner to combine all the aspects of close-range fighting combat in a superb way of training sensitivity, relaxation, and explosive reaction.